Luis Enrique Is The Best Man For Arsenal Job – Lauren 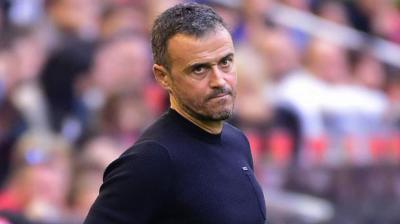 Arsenal Boss Arsene Wenger announced, he will be leaving the Managerial seat at Arsenal at the end of the season and while, there are many speculations fly all over the media, Former Arsenal defender Lauren believes, Luis Enrique will be a perfect replacement.

Arsene Wenger will end his 22 year stay at Arsenal in Sunday’s game against Huddersfield and Juventus coach Massimiliano Allegri is currently the favourite to replace Wenger, but Luis Enrique is thought to be the other name at the top of Arsenal’s shortlist.

Lauren, who had been an important part of  Arsenal’s invincibles believes the former Barcelona Boss will be good fit for the big job at Arsenal.

“I would go for Luis Enrique because of a few facts,” Lauren said.
“The style of play, there are some parallels with Barcelona, the way they play is the ‘Arsenal way’.

“He’s got that killer instinct that you need to manage a big team… you need a manager that has that big personality and the animal instincts to control everything.”

The former Barcelona Boss had successful at Barcelona for three years  claiming two La Liga and a Champions League Trophy before leaving in 2017.

Arsenal have failed to compete for the Premier League Trophy in recent years but that doesn’t give the former Arsenal defender  reasons to doubt, “Arsene Wenger Is Arsenal’s Greatest Manager.

“He took the transition from George Graham to a different style of play.”

“He made so many innovations to the institution and also in the game that allowed all of us to improve.”