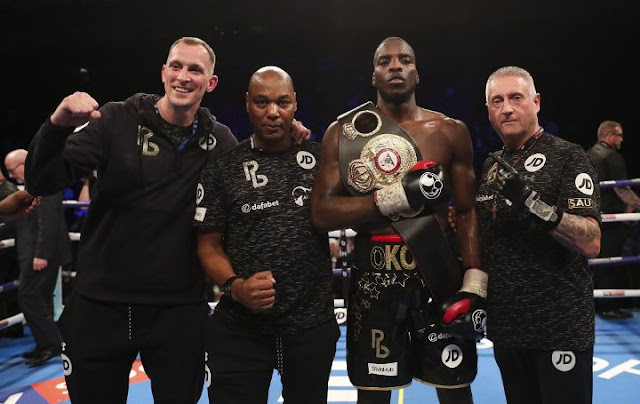 Lawrence Okolie will share the ring with Luke Watkins for the Commonwealth and WBA Continental Cruiserweight titles which is one of the fights scheduled for the JDNXTGEN series which will take place at the York Hall, Bethnal Green on Wednesday June 6, live on Sky Sports.

Okolie Won the WBA belt back in February by defeating Isaac Chamberlain at The O2 in February, flooring the Brixton man twice in his first title fight and first over a championship distance and plans to add another title to his collection when he faces Watkins come June 6th at the York Hall.

Other Fights on the card include Reece Bellotti  defends his Commonwealth Featherweight title against ‘Ruthless’ Ryan Doyle, while young unbeaten Ted Cheeseman and Felix Cash fight for the second time in 2018.

“I’m very excited to be challenging for the Commonwealth title,” said Okolie. “I’ve got one belt to my name and I want to keep on collecting honours, this is the next step.

“I’ll be honest – Watkins looks good. I’ve studied him a bit recently and you have to be respectful of his unbeaten record and style. He’s had more knockouts than I’ve had fights, we’re two unbeaten fighters putting it on the line.

“The Commonwealth title is something I visualised winning even back as an amateur. To win it in a Commonwealth Games year cycle would make it even more special. The atmosphere at York Hall will be mad, I think it will help make it a toe to toe war as the fans are right on top of you – it should make for a great night of boxing.”

“I’ll bring people to London, so expect some noise,” said Watkins. “Lawrence has some pedigree but he hasn’t showcased his ability yet, we didn’t see the best of him against Isaac but he got the win.

“They had a great build up but their styles clashed, our styles will ignite and make for a cracking fight I’m sure of it. I was supposed to have a fight in March but the freak weather caused the show to be cancelled. I’ve been deep in camp since so I’m more than prepared and will continue to work towards this.

“I was in line to fight for the European title but we let that one go, it makes business sense to pursue this one against Lawrence.”