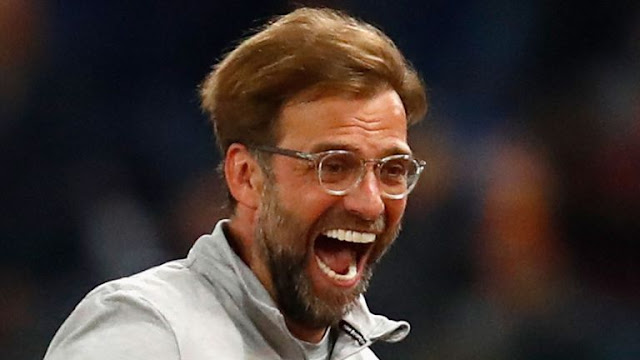 Liverpool FC headed by “Gegen” pressing Pioneer Jurgen Klopp lost their second leg tie with Roma with a 4-2 Scoreline but progressed to the champions League final due to their own share of dominanced, that ended 5-2 at Amfied in the first leg .

Liverpool progressed with a 7-6 aggregate score but almost lost it all, as Roma came from behind to almost level a game which started out with Liverpool leading with a three goal margin. This prompted the Red Boss to send a compliment to Roma for the big performance.

“I have to give a big compliment to Roma,” said Liverpool manager Klopp. “What a performance, what a comeback, what a brave football game.
“It was the first time we were not as good as we can be, so we needed luck and that’s what we had, but over the whole Champions League campaign it’s deserved. As I said before the game, it would have been deserved for Roma too.
“It would have been crazy if we played extra-time. I have no clue how that would have happened. Now it’s 7-6 on aggregate which sounds crazy because it is. We came into the competition as a qualifier and are now in the final and I am really happy for the boys, for the club and our fans. It’s been a fantastic ride so far and now we will go to Kiev, which sounds crazy but it is the truth.
“We cannot go to a Champions League final with constant nice football, that’s not possible. You have to suffer from time to time and we suffered, I have no problem with that.
“Is there anything to criticise? No. These boys go constantly over their limit and I am really proud of that.”

Concerning Real Madrid, who have won the competition twice in a row and have made it four finals in five yearsyhe said.

“We will be ready but it’s Real Madrid. You cannot be more experienced in the competition than Real Madrid.

“I think pretty much 80 per cent of their team played all these finals – four times in the last five years – and they are still together. They are experienced, we are not, but we will be on fire.