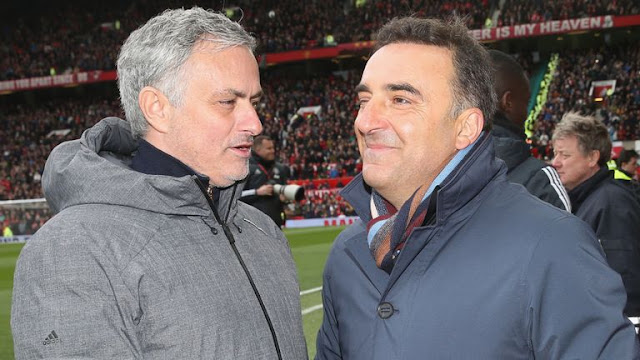 John Toshack has pointed hands at managers like Jose Mourinho, as reasons for Swansea’s relegation, making it clear the, after the Portuguese called the Swans Boss Carlos Carvalhal  manager of the Year  Swansea has gone eight games without a win.

Jose Mourinho had after the win over Swansea praised Carvalhal and his team, promising Swansea will remain in the top flight.

“The last seven or eight games since Mourinho made Carlos Carvalhal the manager of the season they’ve gone eight games without a win,” Toshack said.

“You know they say it’s not the punches on the jaw that soften up the champion, it’s the pats on the back.

“I think after a little bit of a revival, they received a few pats on the back and they’ve gone backwards in an alarming manner really.”

Swansea will need to defeat Stoke City, in their final game of the season to have hopes of survival. If as believed, Arsenal will defeat Huddersfield in the final match of the season.

“At this time of the year they say home advantage is very important,” Toshack said.

“For some of those last night it looked as though the pressure of playing at home was a little bit too much for them.

“If they beat Stoke, I still think they can stay up because, normally speaking, Arsenal would win that game at Huddersfield.”