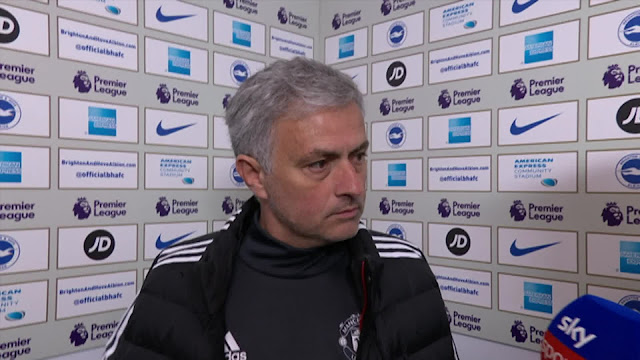 Manchester United Boss Jose Mourinho showed great displeasure in a match that was to give the team second position solidarity and opportunity for players ,who usually don’t play or start from the bench to impress.

He made great changes in the starting line up used against Arsenal last weekend, bring in Rojo, Rashford, Martial, Fellaini and Damian, whom he later replaced with Luke Shaw.

Mourinho has been under pressure to start Rashford in more games but his performance on Friday  justified the Portuguese decisions and Paul Pogba failed to impress in both halves. Altogether, it was totally shocking.

“So maybe now you understand why some players play more than others, and you don’t ask all the time why A, B and C don’t play more.”

“I wouldn’t say disappointed, because I know them, but I thought for some of them the possibility to start the game, to give reason to the ones who all season have been critical towards my choices.

The United Boss in his speech made clear, he had informed the team on what is expected of them against a side such as Brighton, before the start of the game.

“My players, if you ask them, they will tell you that I told them before the match what was going to happen, and at half-time,” said Mourinho. “I knew it, and I told them, but that’s what we got.

“Obviously for Brighton boys, the points mean a lot for them, and enough for them to give absolutely everything they have to give. So they got the bonds of their attitude.”