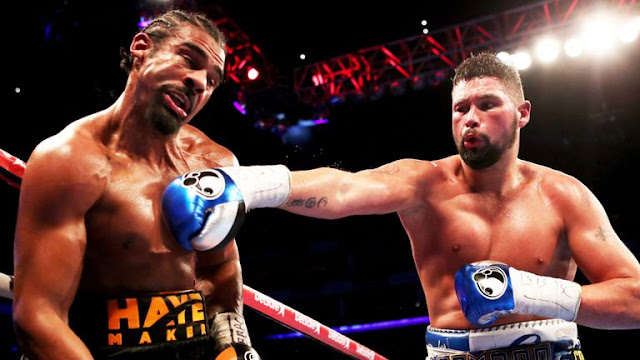 Dillian Whyte has chosen Tony Bellew to end David Haye’s career, as the later attempts to revenge his stoppage loss and humbling defeat in their first fight, when the Square off at O2, this coming Weekend.
Much has said over the media by the two, but Whyte has surprisingly chosen Bellew over Haye, due to recent comments from Haye.

“It’s a massive heavyweight fight,” Whyte said while Speaking to Sky Sports .
“I want to be there to see it. Keep an eye on the winner, and the loser, because they are both potential fights for me.

“It’s funny. Me and Tony, we’ve had back and forth, but we’ve spoken a couple of times. Tony is alright. David is a very ignorant guy. Very disrespectful.

“Right now, I would like to see Tony Bellew tuck him in, to be honest, again. I’m not just saying that because I’m a Matchroom fighter. I’m saying it based on David Haye’s behaviour and his attitude.

“He’s shown how disrespectful he’s been to every other fighter. He always writes me off as well. I would like to see him get tucked in.
“David never says anything good about me and never tries to support anything I do. He always tries to belittle my performance, apart from the last performance.

“He said ‘that is a thrilling knockout, one of the best knockouts I have ever seen’, but then he went, ‘to be honest Browne wasn’t in the best of shape’. That’s the shape Browne is always in, so what you are saying doesn’t make any sense.”

Whyte believes also, that Haye is fighting for his career and that definitely will have given the extra mile, as a loss will signal the end for him.

“I think he’s dangerous, because he’s fighting a lot on pride this time,” said Whyte. “David is one of those guys who has got a big ego and his pride has been hurt.
“Now for once, he’s fighting for his career. He’s never really had to fight for his career ever.

“He knows one loss, that’s it for him, so I think he will be very dangerous and very determined. He knows what’s at stake. Bragging rights, everything is at stake, so I believe he will go the extra mile.
“He’ll come to fight. He will be in there swinging away until he cannot swing away anymore.”