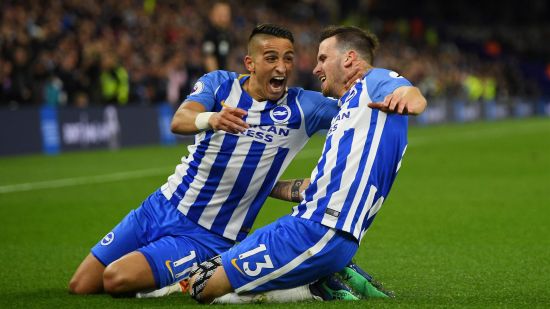 Brighton & Hove Albion showed great spirit against United in their one Nil win thereby securing their spot in the Premier League for the second consecutive seasons
Pascal Gross, the Seagulls’ Player of the Year, made it one up for the Seagulls before the half hour mark, with a header that Marcus Rojo seemed to have cleared savely, only for the goal line technology to say otherwise.
Manchester United  made big changes to their usual starting line up, as Sanchez and Lukaku remained sidelined, giving room for some fringe players to impress.
Manchester United failed to impress, with only one, David De Gea, being the best at what he does, made five good saves to hindered the day from getting worst for United. Paul Pogba was the most wasteful  losing the ball 13 times before half time.
Martial and Rashford got the nod but failed to impress, with the later blowing away the only clear cut chance for United, to get on the score sheet. Fellaini , Damian, Rojo  all players with less play time this season, made it to the starting line up.
The win leaves the Seagulls with 40 points at the 11th position on the Premier League table and with full assurance of a second year in the Premier League