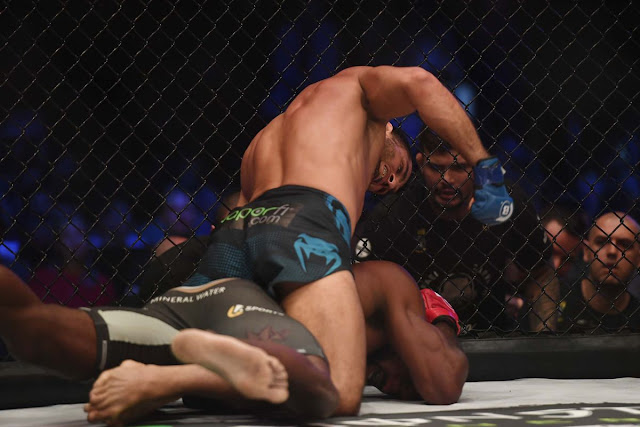 🌑 Gegard Mousasi def. Rafael Carvalho by TKO at 3:35 of round 1: Middleweight Title

The fight ended in the first round, with heavy strikes from Mousasi,  who grounded Carvalho early and landed strikes till the referee stepped in to save the former champ.

🌑 Michael Page def. David Rickels by submission (Verbal) at :43 of round 2: Welterweight

Michael Page remained undefeated against Rickels, who verbally submitted after cut was open under his eyelid.

Page made his intent known early, landing quick strikes and keeping some distance from Rickels. He after the early attack page retreated but out of that retreat caught Rickels with a shot that floored him before the end of the first.

Early in the second, Page caught his opponent with a shot that opened aacut in his eyelid, prompting him to quit and granting Page KO victory.

🌑Aaron Chalmers def. Ash Griffiths by technical submission (Guillotine) at 1:54 of round 1 : Catchweight of 163 pounds

Chalmers got taken down, but did get back to his feet, not without getting kneed in the face first. So how does Chalmers respond? With a heavy right hand that dropped Griffiths, of course. Chalmers quickly cinched up a standing guillotine choke, causing Griffiths to go limp and the fight to be stopped.

🌑 Mike Shipman def. Carl Noon by KO at :11 of round 1: Middleweight

A right hand from Shipman immediately dropped Noon right out of the gate. Shipman followed up with some savage hammerfists that put his opponent out cold, not even given Noon a chance to recover.

Yankova found herself with on the bottom of Jackson within the first minute of the opening round. Jackson moved from position to position, controlling Yankova on the ground and dumping off a big barrage of short shots. yankova did not return to her feet till the end of the round.

Jackson quickly closed the distance in the second round, forcing her foe up against the fence before getting the takedown. Yankova would find her moment to return to her feet, but immediately found herself with her back to the fence again. Yankova did land some ground strikes as Jackson went for a leg lock, but nothing of any substance.

Yankova came out launching her kicks to open the final frame, but it wasn’t long before Jackson was controlling her up against the cage again. Just when Jackson seemed to be in complete control, she botched a takedown and Yankova was able to land on top. As Yankova attempted to take back control, Jackson was able to spin around on top of her to finish the fight with heavy ground strikes as time ended.

🌑 Phil Davis def. Linton Vassell by KO at 1:05 into round 3: Light Heavyweight

Vassell did a pretty sound job of staying on his feet, not allowing the credentialed wrestler to get the takedown. Davis started pouring on the offense in the final 30 seconds of the opening round, landing an assortment of punches and knees before time expired.

half of the second stanza saw more kickboxing from the light heavyweights, with neither man really stressing the takedown. Davis did punch his way into a bodylock takedown, but Vassell did a superb job of getting right back to his feet, even briefly picking up a takedown of his own in a very close round.

the third round saw Phil Davis land a spectacular head kick that dropped Vassell like a bad habit. One follow up ground strike later, and the referee was pulling Davis off of his victim.

🌑Anatoly Tokov def. Vladimir Filipovic by submission at :56 of round 1

🌑Costello Van Steenis def. Kevin Fryer by TKO at 1:27 in round 1

🌑Mike Ekundayo def. Tom Mearns by submission (injury) at 1:02 of round 2

🌑Amir Albazi vs. Iurie Bejenari by submission at 3:21 of round 1

🌑Walter Gahadza def. Kent Kauppinen by submission (RNC) at 2:04 of round 2