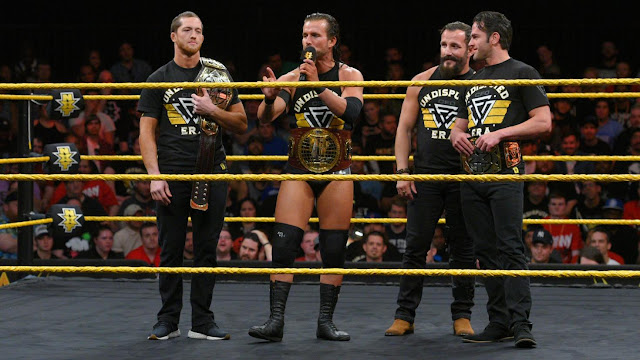 The Messiah of the Backbreaker admitted as much during the controversial quartet’s first appearance on NXT since their triumphs at
TakeOver: New Orleans , where the group not only retained the NXT Tag Team Titles (thanks to Strong’s betrayal of partner Pete Dunne ), but also added a new accolade in the form of Adam Cole’s NXT North American Title. Strong, who wore one of the NXT Tag Team Titles and was introduced as a champion alongside Kyle O’Reilly , said he experienced an epiphany in The Big Easy, as he realized the ERA members always had each other’s backs and suggested The BruiserWeight only cared about his WWE U.K. Championship.

Bobby Fish bragged about the ERA’s ability to overcome the odds, no matter how unfavorable, and O’Reilly said the faction will leave the rest of NXT in the dust. To reinforce that point, Cole then sent his teammates to the locker room, vowing to go it alone in his first NXT North American Title defense on WWE Network against Oney Lorcan. 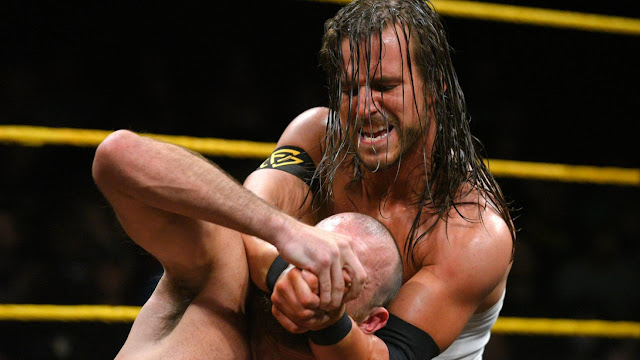 Adam Cole was still showing the effects of his two matches at TakeOver: New Orleans. Oney Lorcan took full advantage, punishing The Panama City Playboy with an abdominal stretch and a knee to the ribcage. Lorcan then hung up Cole stomach-first onto the top rope. As Cole writhed in pain on the floor, Kyle O’Reilly ran to ringside with an athletic trainer and threw up an “X” — indicating Cole needed medical attention. With the referee’s attention diverted, Roderick Strong attacked Lorcan on the other side of the ring, dropping him with a suplex onto the ring apron.

The NXT Tag Team Champions then suddenly deemed Cole able to compete again, and he slipped into the ring to blast Lorcan with the Last Shot and pick up a questionable victory. Undisputed ERA beat down Lorcan after the bell, prompting Danny Burch to come to his teammate’s aid, but the British brawler was quickly smothered by Cole, Strong & O’Reilly. 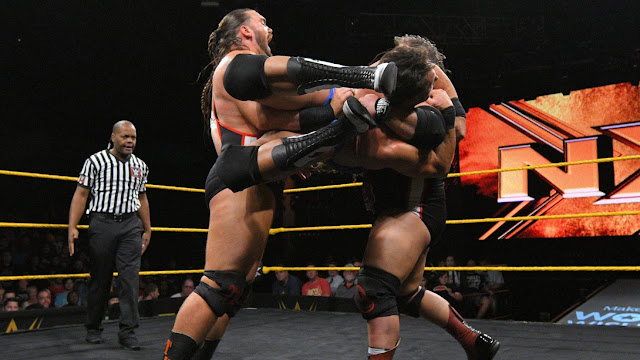 Late in the hard-hitting match, Dozovic dodged a shoulder block by Riddy Mo, causing Moss to barrel into Sabbatelli. The miscommunication evidently rankled Sabbatelli, who refused to tag into the action moments later and instead retreated to the locker room, abandoning his once-inseparable tag partner. Facing a two-on-one disadvantage, Moss was easy pickings for Heavy Machinery, as Dozovic & Knight hit him with the Compactor to prevail.
As Moss was left to contemplate Sabbatelli’s actions, Heavy Machinery called out The War Raiders for attacking them two weeks ago, with Dozovic & Knight declaring they’re “coming for 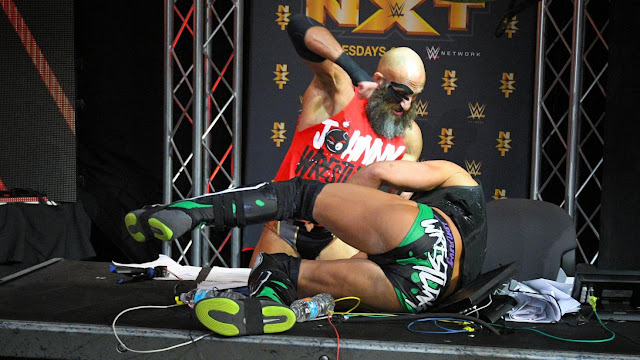 the wretched Blackheart struck again, not only costing Gargano his title opportunity, but also sending the beloved Superstar to a local medical facility after a harrowing attack.
Ciampa ambushed Johnny Wrestling from behind during his ring entrance. He ran him into the announce desk and yelled that Gargano would “never get rid of” him. Gargano courageously fought back, but a low blow dropped him to his knees. Though NXT referees tried to intervene, Ciampa’s onslaught only escalated further, and he drove Gargano off the stage, through equipment tables below.
Once Ciampa exited, officials and medical staff rushed to Gargano. With a tremble in her voice,
Candice LeRae assured her husband that he would be all right. Gargano was placed onto a backboard and stretcher, and Kassius Ohno joined the procession as it somberly but urgently snaked through Full Sail, passing distraught-looking Superstars — including Black — until it reached a waiting ambulance. 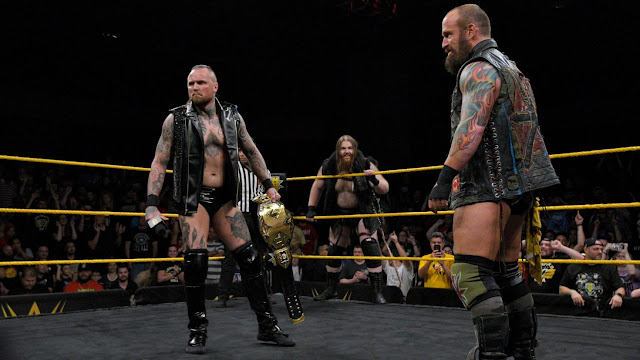 The NXT Champion used his striking prowess to repeatedly beat Young to the punch during the rugged contest, but in staving off interference by Wolfe, he lost sight of Young, and the ring veteran capitalized on it. Still, the SAnitY maestro could not keep up with the black-metal mutilator. Just when it looked like Young was one step ahead, he was, in fact, one step behind, walking right into a blink-and-you’d-miss-it Black Mass that put him down for the three-count.

Wolfe and Dain tried to pounce on the NXT titleholder after the bell, and The Dutch Destroyer turned out their lights with a pair of Black Masses. As one of NXT’s wildest factions of all time appears destined for SmackDown LIVE , Black stood tall, signifying that SAnitY’s brand of chaos will no longer destabilize the black-and-yellow brand.