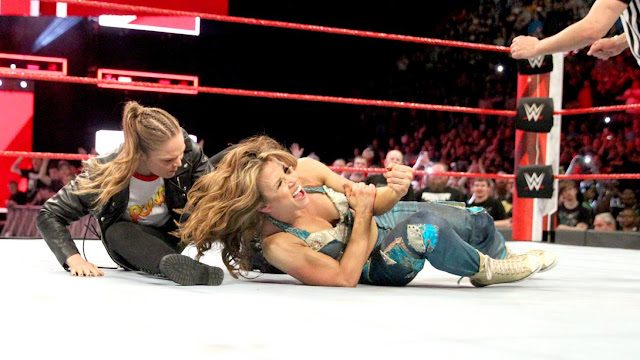 Ronda Rousey made her presence felt at the end of a 10-Woman Tag Team Match that pitted Raw Women’s Champion Nia Jax, Natalya , Ember Moon , Sasha Banks & Bayley (still not quite meshing together) against Alexa Bliss (who evoked her rematch against Jax for WWE Backlash in a faux-PSA about the dangers of “bullying”),
Mickie James & The Riott Squad that Raw GM
Kurt Angle had sanctioned in order to give the female Superstars the same spotlight the men had received the previous week. 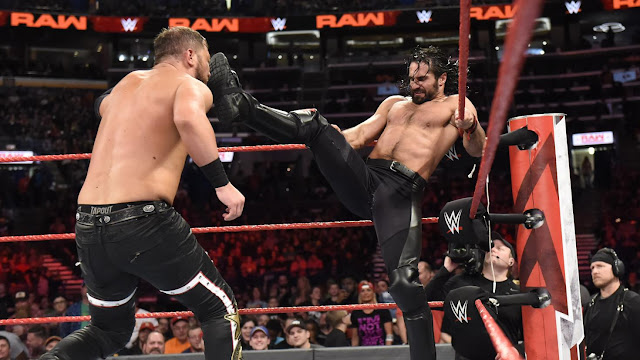 The Miz and his entourage “The Miztourage”, ones again failed to show superiority over Seth Rollins and Finn Bálor.. Bo Dallas & Curtis Axel facing Rollins and Finn in a tag team match showed much talent in the ring but Finn provided the finishing touch — the Coup de Grâce, if you will — on The Axe Man, and that was that for a solid team-up between Seth & Finn. 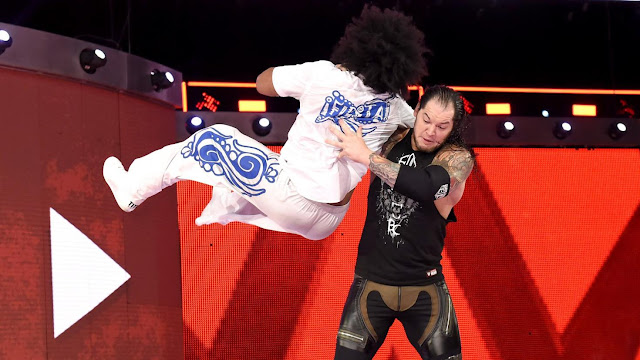 Dominican Dancing Machine had been scheduled to face Baron Corbin in his Raw return post-Superstar Shake-up, but The Lone Wolf decided not to bother. For one, he would only accept “serious competition”; for another, he wasn’t about to play into Jose’s good-times mentality when he only enjoys spoiling everyone else’s fun.

Corbin out of the picture, Jose attempted to start the dance party back up, but The Lone Wolf resurfaced right when Jose made his way to the top of the ramp, blasting No Way from behind, throwing him into the LED board and planting him with a chokeslam-backbreaker. 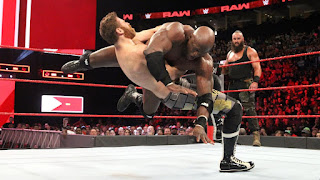 . Strowman & Lashley’s strength advantage was evident from the very start , and it forced Owens & Sami to get creative to stay in the fight. While their cat-and-mouse routine in the early goings went nowhere, Owens got in a cheap shot on Lashley on the outside in order to give Zayn some breathing room. Their strategy turned to keeping Braun Strowman out of the match at all costs, but The Dominator eventually reached The Monster Among Men

Strowman’s progression to victory was ruthless and unstoppable. He pulverized Zayn and blasted the meddling Owens with a pair of shoulder tackles and a T-Rex Dropkick until KO was out of the equation. Lashley tagged in momentarily to drop Zayn with a stalling suplex, and The Gift of Destruction closed the book with a Running Powerslam.

Despite his loss at WrestleMania (to say nothing of the looming threat of Samoa Joe at WWE Backlash), Reigns confronted The Conqueror with a simple promise to his longtime enemy — that no matter how he returned from Saudi Arabia, he would have the title with him — and made his exit in confident fashion. 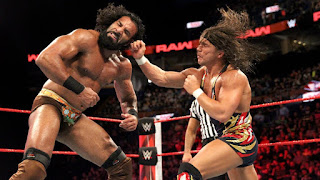 Mahal, still reeling from his United States Title loss to Jeff Hardy last week and facing his rematch at the Greatest Royal Rumble event, opened his evening by demanding to be sent back to SmackDown LIVE. Gable, meanwhile, is on the cusp of his first proper singles run .

It was fitting that a backstage confrontation in Angle’s office between the two Superstars led to a match , and it was also fitting that Jinder jumped Gable before the contest even began. The Modern Day Maharaja clearly thought Gable would pose little threat after his sneak attack — Sunil Singh never even got involved — but the former SmackDown Tag Team Champion showed that a little grit goes a long way when he hooked Mahal’s leg as he attempted the Khallas, stopping The Maharaja’s victory march cold.

Gable ran up the turnbuckle in order to roll up the former U.S. Champion and notch a three-count that left Jinder fuming in the ring for the second week straight. 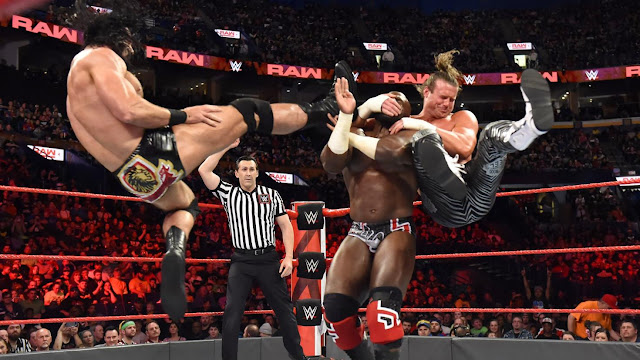 Apollo was subjected to a superkick-Alabama Slam combo before suffering the Claymore-Zig Zag one-two for the pinfall — they made no bones about their aspirations going forward, with McIntyre claiming he was the “wake-up call” for a complacent locker room and Ziggler (emboldened now that someone “has his back”) declaring the team wouldn’t steal the show because they were the show.

After setting up a Clash Cesaro & Sheamus for the vacant Raw Tag Team Championship at the Greatest Royal Rumble event, “Woken” Matt Hardy & Bray Wyatt turned their focus to The Ascension, making their Team Red return after coming over from SmackDown LIVE in the Superstar Shake-up.

the former NXT Tag Team Champions put an undoubtable hurting on their opponents, pummeling Hardy into the corner while Wyatt was stranded on the apron. Much like last week, however, The New Face of Fear’s entry into the match proved to be the turning point. He dispatched an interfering Konnor with Sister Abigail, leaving Viktor ripe for the picking of a wonderful tag team finishing maneuver.

Former United States Champion, who never seemed to think that the match was slipping away from him no matter how tough Elias hung down the stretch. As Booker T put it on commentary, Roode cut off his attack at several points to “admire his own handiwork,” and that showmanship ended up leaving him open to some good old fashioned chicanery from Elias, who rammed Roode’s shoulder against the ropes to weaken him for a match-ending rollup.