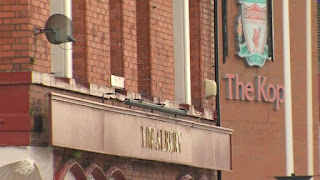 Two Italian men have been charged for misconduct in the Liverpool – Roma UEFA Champions League Semi Final Clash at Amfield on Tuesday.
Filippo Lombardi, 20, has been charged with violent disorder and wounding/inflict grievous bodily harm while Daniele Sciusco, 29, was also charged with violent disorder both of whom have been charged by South Sefton Magistrates’ Court on Thursday morning.
A 53-year-old man, Sean Cox traveled in from Ireland for the game and has since  been left in critical condition at the Walton Neurological Centre, due to attacks from this due before the game on Tuesday.

“We can confirm that detectives have charged two Italian men following an incident in Anfield on Tuesday, 24 April in which a 53-year-old man was seriously injured.

“29-year-old Daniele Sciusco was charged with violent disorder.
“Both men have been kept in custody to appear at South Sefton Magistrates Court this morning, Thursday 26 April.

“The victim remains in hospital in a critical condition at Walton Neurological Centre.”

In a separate incident, Merseyside police charged Edoardo Ranalli, 28, also from Italy, with throwing a missile onto a football playing area after he threw coins onto the pitch during the game.