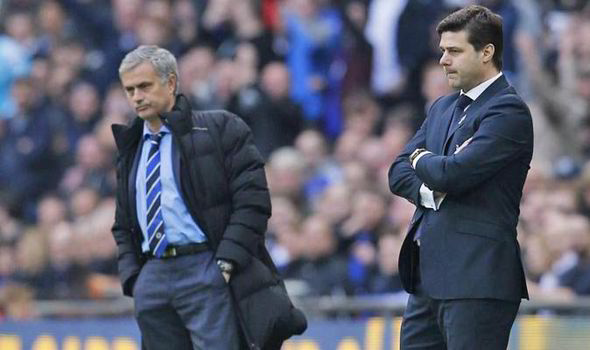 Tottenham Hotspur will play Manchester United at the Wembley Stadium, which presently is the Temporary home of the Spurs and will indirectly by logic, give them a home advantage.
That above will be the usual thinking, but Pochettino, the Spurs Boss said, playing the semi final at Wembley won’t grant them that advantage despite defeating Borussia Dortmund, Real Madrid, Liverpool, Arsenal and United In this adopted home.

“No, I don’t believe so because Manchester United have the experience of playing in Wembley too. It’s not an advantage for us, not a disadvantage for them.

“I think it will be a typical FA Cup game at Wembley: Half Tottenham and half Manchester United and I don’t believe we will have some advantage for that.”

Talking about the changes, as the English FA, has given the Spurs the eastern part of the stadium to prepare for the clash, as they have been used to using the full stadium.

“Now it feels different because we will share facilities with Manchester United,”

Pochettino added. “During the season only we own the stadium and we feel like home. Now we are going to share with Manchester United. Of course it’s special, it’s a different competition and sure that the atmosphere will be completely different to the Premier League.”

The FA Cup has been taken by Pochettino as a Second Tier trophy and to him, winning the trophy will not change his mentality.

“It’s fantastic if Southampton, Chelsea, Manchester United or Tottenham will win the FA Cup,” he said. “Is it going to change our life? I don’t believe so, I don’t believe. Who needs it more, I don’t know. We are going to try and fight to win, but it is not about need or not need, it’s about a title that would be fantastic to finish the season, play in the final and win trophy.

“At the end it would be fantastic the finish the season with a trophy but I don’t think it’s about need or not need.

“Every press conference you ask [me about the FA Cup’s importance]. Always my answer is yes I agree that if we are capable to win the Premier League and the Champions League, it is a moment you say the team has improved and reached the next level,” he added.

“Until that, winning the FA Cup or the League Cup will be fantastic for our fans but is not going to move the club to a different level. That is my opinion. Some people respect it, some people don’t. I respect all opinions. I want to play to win the Premier League and Champions League.