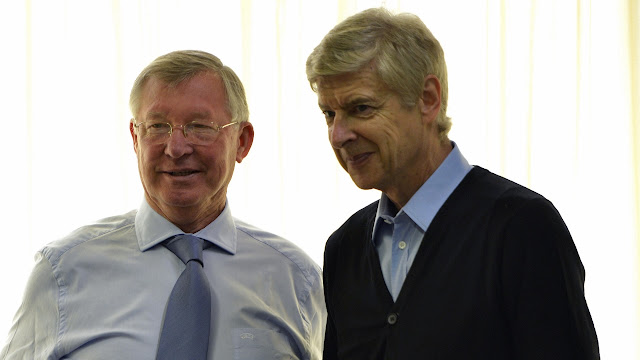 Manchester United Legendary manager Sir Alex Ferguson has sent his heartfelt and Emotional Tribute to the departing Arsenal Boss Arsene Wenger, who announced this morning, he will be leaving at the end of the season.
Arsene Wenger with Sir Alex Ferguson, during his time at Manchester United, were great rivals and this spanned a total of seventeen years, with one of the big games including one of the greatest games in FA Cup history – the 1999 semi-final replay at Villa Park.

“I am really happy for Arsene Wenger,” Sir Alex told ManUtd.com . “I have great respect for him and for the job he has done at Arsenal.

“It is great testament to his talent, professionalism and determination that he has been able to dedicate 22 years of his life to a job that he loves. In an era where football managers sometimes only last one or two seasons, it shows what an achievement it is to serve that length of time at a club the size of Arsenal.

“I am pleased that he has announced he is leaving at this stage of the season, as he can now have the send-off that he truly deserves. He is, without doubt, one of the greatest Premier League managers and I am proud to have been a rival, a colleague and a friend to such a great man.”

Manchester United will be facing the Gunners, in their next home game and that will make it 60 times against United with Wenger in Charge, winning 18 games, drawing 15 and losing 26.