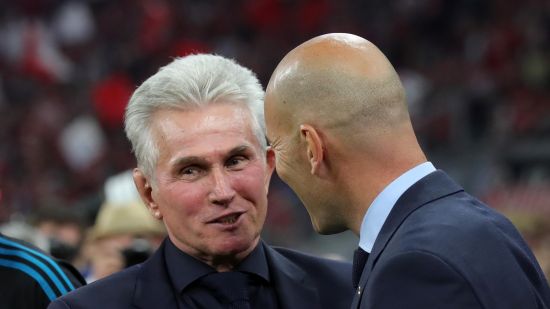 Real Madrid laboured from behind to secure an away win at the Allianz Arena on Wednesday, a game that cost both teams two important players each.
Both teams had their spell of domination and urging the game with Bayern Munich wasting most of the chances in the game. After the game both Managers share their own opinions on the match.

“We are not giving up,” said Heynckes, who led Bayern to a treble of titles in 2013. “When you create so many chances against a team like Real then this is also an indication that the opponent is vulnerable.

“We have nothing to lose and we will be play freely. Maybe more so than in the first leg because our game was not as fluid as we would have liked.”

“I am not blaming anyone but our defensive operation in both their goals was very bad,” Heynckes said. “Our finishing was also not good. We were not as efficient as usual.”

From Zidane, His team had to surfer much to secure the win, which will be crucial in their second leg clash in Spain for a place in the final.

“We had to suffer, but in the end we did it, we got an important result,” Zidane said in his post-match press conference.
” You can’t play a Champions League match without suffering.”

“It’s a shame we lost Isco, but then Marco came on and made a difference.Everyone has to suffer and work without the ball.”

“He’s played a fantastic game,” Zidane added.
“He worked a lot and even finished the match at right back. With the help of Modric, he was even able to control Ribery.”
There were concerns over Carvajal, but Zidane said he didn’t think it was too serious.

“He’s picked up an injury,” the Frenchman said.
“He doesn’t think it’s overly serious. We’ll have to wait for the scans.”