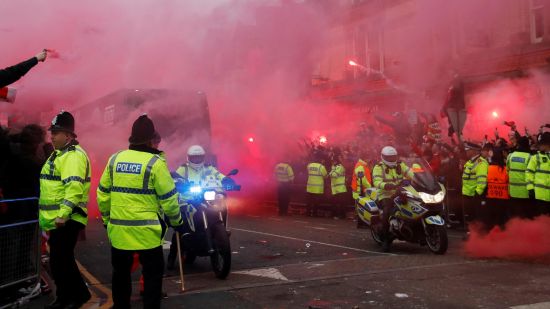 Liverpool enjoyed a very good first Leg against Manchester City at Amfield on Wednesday but are set to have issues with UEFA, who have already laid four charges against the English team for the attack on the Visitors Team Boss before the game.
Liverpool had been quick to issue apologies for the conduct, condemning it and promising to bring anybody found guilty to face the full force of the Law before the start of the game but City Boss Pep Guardiola was still very critical about it.

A statement released by UEFA has revealed the charges labeled against the Red and a dead line for their Defence.

“The charges of acts of damage and crowd disturbances relate to incidents involving the Manchester City FC team bus. This case will be dealt with by the UEFA Control, Ethics and Disciplinary Body on 31 May.”

“The club condemns in the strongest possible terms the scenes which preceded our Champions League quarter-final, which resulted in damage being inflicted on the Manchester City team bus during their arrival at Anfield,” the statement read.

“Thankfully no-one on the bus was injured, but injuries were caused to two of our officers when projectiles were thrown towards the bus. The officers and stewards are there to protect the public and keep them safe.

“This behaviour by a number of people who threw bottles, cans and pyrotechnics towards the bus is completely unacceptable and we will conduct enquiries to identify who was responsible and bring them to justice.”