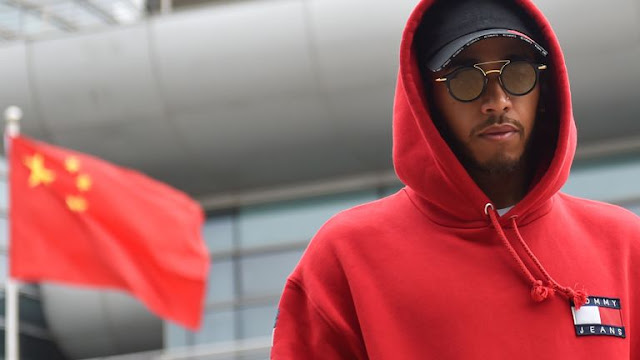 Lewis Hamilton is predicting another close encounter like the first two races of the 2018 F1 season, as he prepares for the Chinese GP this coming weekend.
Despite the predictions, during the F1 season of a smooth 2018 F1 season for Hamilton and the Mercedes team, Sébastian Vettel has won the first two races leaving Hamilton trailing with 17 points.
The Brit also admitted that, despite winning the last four Chinese GP, the Ferrari team this time will be hard to beat due to their straight-line speed.

“They are going to be hard to beat,” said the F1 reigning world champion. “Their straight-line speed in the last few races has been faster than ours and we have the longest straights here. So I’m anticipating they will be very, very fast and hard to beat.

“They are faster than us on the straights and as quick as us through the corners. Their engine programme has really taken a big step this season. It will be interesting to see how their reliability will be – as it will be for Renault and us.

“This should be a good track for us but I think it’s going to be close.”

“I still believe we are the best team. We definitely have the potential to win races and to fight for this championship. But what’s important is that we all stay on our toes.

“We all need to be performing at our utmost and it’s even more crucial this year as it’s magnified because we are so close.

Ferrari are really performing well – and both Kimi and Sebastian are performing really well – so l think it’s a tougher season than last year. Ferrari have got a very fast car and there are millimetres between us.”
Hamilton believes that there will be improvement in team performances later in the season but admits he doesn’t really know why he is having this kind of a season.

“It’s definitely not planned! If you look at Melbourne, performance-wise I was really happy with our performance up until the moment we lost the race,” he said.

“But it had been such a strong weekend and I’d been so on it with the best qualifying lap I’d done for a long time, then the strength in the race.

“I don’t know why that is we generally don’t start off the best. But I don’t think it’s a bad thing that we have wake-up calls within the group because it’s easy for us a humans to whether it’s be complacent, over confident or under confident, under expect or over expect. Just finding the right balance.

“You kind of stumble through the first few races and then find your ground and know what to do. It doesn’t matter how many races you do, that’s part of the racing process. If you be too aggressive, you lose a whole race and maybe lose more points than you should have. If you be under aggressive, you don’t get any points.

“I think we’ve been strong in those years and just getting a steady pace to start with. Would I like to start with a bigger blow? Yes. But that’s what we tried in Australia and we can across a scenario that we didn’t have the right execution for. We learnt from that and we take it onwards.

“But it’s still a second and a third – if you have that the whole way through the season then you’re in a good place to win the championship… [although] not when you’re behind Ferrari.”