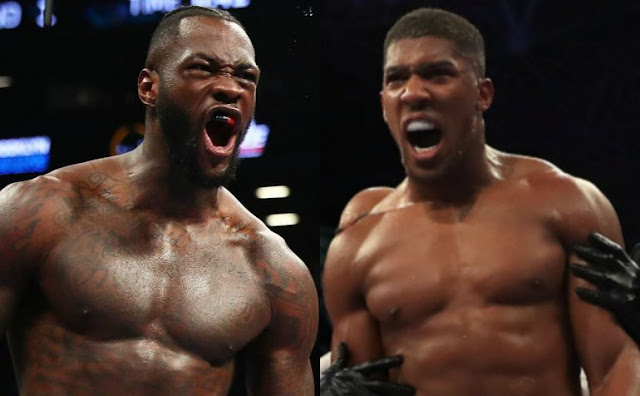 The Boxing  Heavyweight Titles are now in the hands of two Unbeaten kings, who now seem to be longing for Unification and for all the trash talking, it is what the fans and the Boxing world have expected from the two Knock out monsters of boxing.
With Joseph Parker now out of the picture, the two have no distractions at hand, except possible mandatories, which non of the governing bodies have ordered. Below are a some interesting conversations between the two today 3/4/2018.
Anthony Joshua Not His Own Boss, Team Responsible For Fight Hold Up- Deontay Wilder

“I’m gonna make my money regardless,” Wilder told BoxingScene.com. “My family’s gonna eat regardless. But at the end of the day, when it’s all said and done, if this fight don’t never be made, the world will know why it wasn’t made. It won’t be because of Deontay Wilder. It’ll be because of Anthony Joshua and his team. I’m my own boss. I say who I wanna fight. He’s not his own boss.

“What is he doing? If he was his own boss, he would make the decision. He let everybody else speak for him. I say what I want. Why can’t he do the same? People are getting tired, man, and I’m just gonna wash my hands of this situation. I’m gonna let the people, let the fans, let the reporters, I’m gonna let everybody that’s dealing with boxing come out and smoke them out of there.”

“We are really glad that Anthony Joshua said for the first time ‘I will fight Deontay next…’ and we believe he is a man of his word. Deontay accepts the challenge.

“We want to make it public that Deontay wants the fight, and we are prepared to come over, or meet here and get the deal done. Deontay is ready to sign and come to the UK to fight this summer.

“We’re ready. Let’s do it. And anyway, unification fights always trump mandatories. A unification between Wilder and Joshua would push the mandatories back.

“Assuming it will be Wembley Stadium in the summer, we are ready, and if they are ready as they say they are, we want to get it done.

Wilder To Fight Breazeale Next, Because Of Manager Complications – Eddie Hearn Of Matchroom Boxing

“So why pull out if he had nothing else on? The answer is because he’s fighting Deontay Wilder. If Wilder then fights in June or July against Breazeale, then our fight with Wilder would not take place until November or December.”

“Conversations have been going on for the last few weeks behind the scenes,” he said. “Now we have got Saturday out of the way, they can continue. It’s difficult because Wilder has three managers – Al Haymon, Shirley (Shelly Finkel), and Jay Deas.

“They don’t really like each other and each one will feel they don’t need the others. Al says why does he have to deal with Shirley? Shirley says he has lots of experience so why does he needs Haymon. And Deas has been with Deontay from the beginning and is thinking ‘why did we have to bring these two in?’

“I’m speaking to Al Haymon’s people. I’ve got a good relationship with them and I can do business with them.

“I did the Charles Martin deal with them, Dominic Breazeale, Errol Spence Junior deal when he fought Kell Brook. I’ve done lots of big fights with them very easily. But with Shirley, I can’t see an agreement taking place because we don’t like the way he does business.

“Every time Shirley comes out in the media, it takes things further away and people don’t realise it’s really difficult.”

“Really, if we don’t make this fight by the end of 2018, or by January/February 2019 at the very latest, it can’t happen for all of the belts because the mandatories will be due.It would still be big, but it would not be historic.”