Skip to content
HomeBoxingJarrell Miller To Anthony Joshua : Parker Beat You, I Will Bust You Behind

Jarrell Miller To Anthony Joshua : Parker Beat You, I Will Bust You Behind
28/4/2018 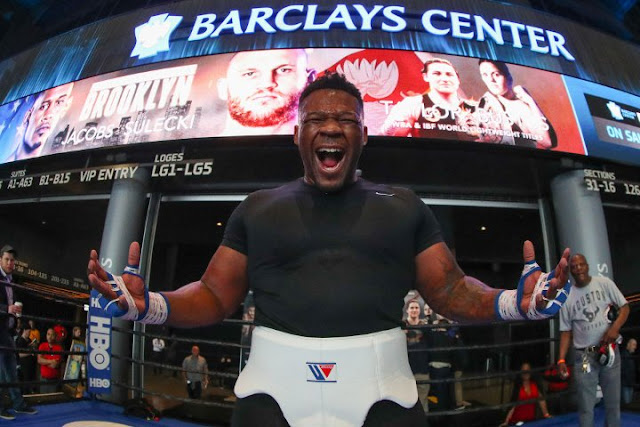 Heavyweight contender Jarrell Miller has been throwing stones at the IBF, IBO, WBA, WBO unified champion Anthony Joshua (21-0, 20 KOs) to show his displeasure with the Brit and this time around his subject is the Parker fight  which had the Brit go thh distance for the first time.

Jarrell “Big Baby” Miller will be facing France’s Johann Duhaupas, (37-4-0, 24 KOs), later in the day and if he wins, will end up Joshua’s mandatory, which he is very confident, he will be the winner .

“By far [Joshua sucks], by far. Listen, I thought Joseph Parker pulled it out by a round or two in that fight…. with the speed, the hand movement and landing more punches. But like I’ve said, when you’re fighting a guy in front of his hometown crowd you’ve got to really beat him up,” Miller told BoxingScene.com.

“AJ did not show as much resilience as Deontay [did against Ortiz]. Deontay has some street, he has some dog in him. With AJ we haven’t really seen it that much. When he takes his foot off the gas, he regains his stamina and comes back. But in that fight [with Parker] he got caught with a left hook and he’s looking at the referee and the referee called it a headbutt. That was a solid left hook that he got caught with by Joseph Parker.

“Like I said, there is a difference when fighting animals and dogs. Like me and Deonay, it will be a mega-fight when I fight him, because we’re both crazy, we’re two animals. I will rip his head off anyway, but I’ll take the kitty cat right now, which is AJ. Eddie Hearn needs to let the cat out of the bag.”

Yesterday  in an exclusive interview with Skysports, he had also sent Joshua a scary warning of “Busting His Behind” and “Knocking His Head Off”. Also making mention of his plans, if the Joshua Fight does happen.

“I always perform when the pressure is on,” Miller told Sky Sports. “I know if they say AJ’s going to be next, I’m coming for you buddy.

“I’m not Deontay Wilder. I’m not Charles Martin. I’m not [Dominic] Breazeale. I will bust your behind. You come to Brooklyn, you better beware. I’m going to kick your butt and send you home with a Brooklyn hat.”

“We have Plan A and Plan B,” said Miller. “Plan A is if Eddie Hearn really puts me in the ring with AJ, he gets his money counter, and I knock his behind out.

“Or Plan B for me, is actually fighting Manuel Charr in Germany, or doing a headliner in America with HBO. Manuel Charr versus Big Baby in Brooklyn.