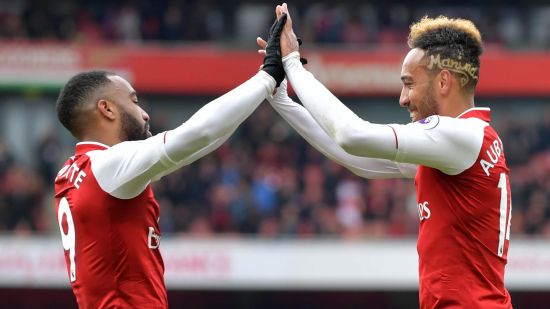 Arsenal striker Pierre-Emerick Aubameyang has conceded he didn’t feel 100% sure he could work with Alexandre Lacazette when he joined the club, both of whom were rivals in Ligue 1 before the first made his way to Bundesliga.

The two players looked more likely to clash at the Emirate, due to their similar roles in the team but Aubameyang called off all fears, in an interview with Arsenal official website.

“My friend Lacazette was at Lyon when I was at St Etienne,” Aubameyang said. “He’s a player I appreciate and was good for me when I arrived here as he’s a nice person, very positive.

“I wasn’t 100 per cent sure about him when I came here as there were some Lyon players I didn’t get on well with but he wasn’t someone I had problems with when I played against them.”

“I’m really happy to get to know someone so positive and he helped me settle into the dressing room.”