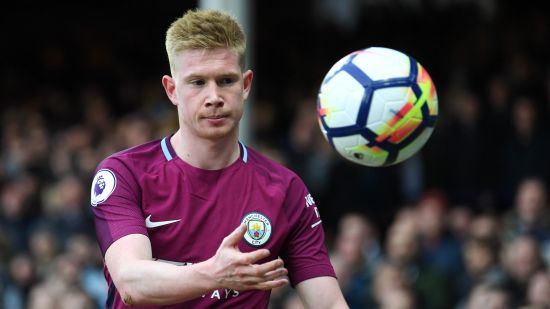 Manchester City midfielder Kevin De Bruyne has been so impressed with his performance this season and believes he deserves the POTY Award this season.

“Well, if I get it, it would be nice I think for the team and for me. In one way I believe I deserve it, because I have been very consistent in my form,” said De Bruyne.

“I am very happy with myself, I am very pleased with how I have played, I didn’t expect to be this good this season, to be honest.

“I think there is almost no game where my standard has dropped, so I have been very constant, and I am very happy with myself. To maintain the level the amount of games I have played, the amount of minutes, I am very pleased with that.”

Salah has also been on the radar this season foo his 29 Premier League goals this season from a forward position and this hasn’t skipped the Belgians gaze.

“Everybody has his own opinion. It depends on what people are looking for in a player.

“Salah has a remarkable goalscoring run, and he plays very well like an inside forward type of role, for me. This season he has been incredible.

“To compare us, I don’t know. With the statistics how are we going to compare ourselves? It’s totally different, I played (against Everton) like a defensive midfielder, how you can compare me to an inside forward? I have no idea.

“He has been outstanding, his record speaks for itself. It’s just the way it goes. Luckily I don’t have to do that.”