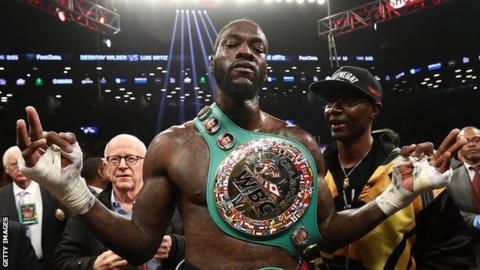 WBC Heavyweight Champion Deontay Wilder will be glad that Anthony Joshua, who owns the remaining division straps is now facing his direction for a unification fight later in the year, but is unhappy with the Offer sent to him by the AJ team and He is planning a counter offer within 48 hours.
Earlier this week, it was reported that the Deontay Wilder team rejected an offer of 12.5 million from the Anthony Joshua team for a Heavyweight unification fight, the offer Joshua claimed on Thursday was a bait for a counter offer from Team Wilder and He Will agree if it’s 50-50.
Commenting on that Wilder’s co-manager Shelly Finkel, question AJ’s reasoning for the statement offering 12.5 and willing to accept 50-50 for a potential 100 million unification fight.

“It will either be today (Thursday) or at the latest tomorrow (Friday). If he wants the fight, it will happen,” said Finkel.

“I would offer him something that gives him both a guarantee and an upside. We are working on how to structure it.

“We believe it’s a minimum of 60 [per cent to Joshua], probably closer to a hundred, but who knows?

“Again, even at 60 [per cent], he offered 20 per cent flat [to Wilder], but he wants 50 per cent flat. Come on. If he wants the fight then either don’t underprice Deontay and don’t overprice yourself.”

The offer given from the AJ team was said to be a ‘take it or leave it’ offer from Eddie Hearn but this has been rejected by Finkel.

“What we’re going to offer, if he doesn’t take, I don’t know where you go. But it will be interesting.

“And you still say ‘I would have fought him’. That’s one side, or if you don’t want the fight you offer the other side so little that they won’t take it.

“I think the world will look at the counter offer and say, ‘if he wants the fight, this should happen’.”