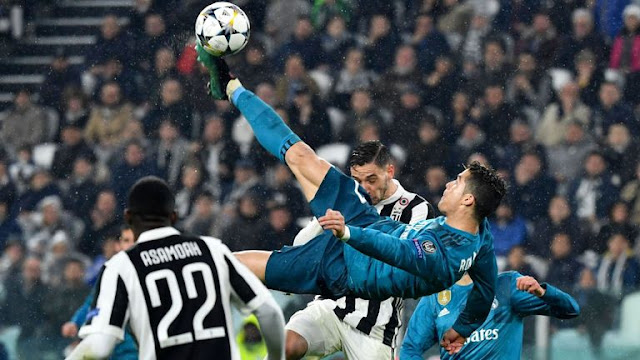 Cristiano Ronaldo Is “The Greatest Of All Time”, is a topic many will love to argue but when a forward scores 25 goals in his last 13 games for club and country, will resolve your argument before you actually begin.

CR7 was on top Form against Juventus, breaking their choked up defense, in just 3 minutes then creating a stunning goal with an outrageous unbelievable overhead kick to double the lead, prompting a standing ovation from the Juventus Fans.

Juventus recently have been through a lot of Champions League disappointment, suffering defeats in the final, twice by Spanish sides, one of which was their Quarter Final opponent yesterday, the one with the 5 time Ballon D’or winner Cristiano Ronaldo. That would have been enough to generate anger shots, a quiet Juventus Air and Protest Banners but no we got a standing ovation with Claps and awe for CR7.
THE RONALDO STATISTICS

🌐 He has scored 39 goals in 36 games for Real this season – more goals than anyone else who plays in one of Europe’s top five leagues (England, France, Germany, Italy and Spain).

🌐 The Portuguese has scored in his past 10 Champions League games – all nine this season and last year’s final – netting 16 times in that run.

🌐 He has scored nine of his past 11 shots on target against legendary goalkeeper Gianluigi Buffon.

🌐 Ronaldo has scored the first Real Madrid goal of a Champions League game in 10 of the past 14 games.

🌐 He has scored 22 goals in Champions League quarter-finals, one more than Juventus. Only five teams, including Real Madrid, have scored more.

🌐 Ronaldo has either scored (14) or assisted (three) 68% of Real’s 25 Champions League goals this season.

🌐 He has scored in each of his six games against Juventus – nine goals in total. No player has more against a single opponent in the Champions League.

🌐 Juventus goalkeeper Gianluigi Buffon
“Ronaldo is an extraordinary champion. Together with Lionel Messi, he is the only one that punctuates his team’s most important victories, and is to be compared to [Diego] Maradona and Pele.”
🌐 Juve defender Andrea Barzagli
“Cristiano made up the second goal. It’s a Playstation goal. When you come up against one of the best in the world like Ronaldo, you need to be perfect. If you give him any space, he’ll punish you. He scored a goal that will go down in history – and unfortunately it was against us.”
🌐 Juventus coach Massimiliano Allegri
“I don’t know if Cristiano’s goal is the best in the history of football, but it’s certainly an extraordinary goal. You can only congratulate him for what he’s doing at present.”
🌐 Real Madrid boss Zinedine Zidane
“Cristiano Ronaldo is different. He’s a different player to everyone else and he always has this desire to do something extraordinary in the Champions League. He never rests on his laurels.
“His overhead kick was remarkable, yet he missed two much easier chances. That’s football.”
To be Sincere, CR7 is 33 and whatever you will have in mind should be in comparison with a forward of his age, who has performed right from the beginning of his career till the age of 33.