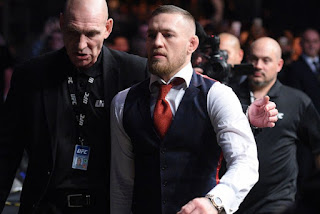 Conor McGregor turned himself in to police custody, after the incident at the UFC 223 media day, which he and his teammates perpetrated had him wanted by the New York Police Department.
“The Notorious” has now been charged with three counts of assault and one count of criminal mischief for his involvement in the act and his teammate Cowley, a fellow MMA fighter, was charged with one  counts of assault and one count of criminal mischief.
Conor McGregor and his teammates visited the Event and from the back stage area where they all threw objects at the UFC Bus Full of UFC fighters and in a footage, McGregor was seen throwing a dolly through the window, into the Bus.
The Event has now been reported canceled from the UFC 223 Fight schedule due to the incident. Canceled fights include Lobov’s scheduled bout with Alex Caceres, Ray Borg’s flyweight meeting with Brandon Moreno was also canceled and Michael Chiesa was also forced from his lightweight bout with Anthony Pettis after suffering facial lacerations.

Ray Borg reportedly, complained about being unable to close his eyes due to shards of glass after the incident while Artem Lobov was forced off due to his involvement in the incident.
The UFC, through the President had announced earlier in the week that Conor McGregor will be stripped of his lightweight title, ones the headlining lightweight bout between Nurmagomedov And Max Holloway begins on Saturday night.

“During today’s media event at Barclays Center to promote ‘UFC 223: Khabib vs. Holloway,’ Conor McGregor and Artem Lobov entered the building accompanied by over a dozen individuals.

“The group, which included McGregor and Lobov, vandalized the vehicle that contained a number of athletes competing at the event taking place this weekend. NYPD was immediately alerted and is currently in the process of investigating the situation. UFC is working very closely with the New York Athletic Commission, Barclays Center security and law enforcement authorities. All parties are working together to ensure the highest standard of proper safety precautions are implemented to protect the fans and athletes.

“The organization deems today’s disruption completely unacceptable and is currently working on the consequences that will follow. Immediately, Lobov has been removed from this weekend’s card and individuals involved in the incident are not welcome at tomorrow’s ceremonial weigh-in or Saturday’s event at Barclays Center.”