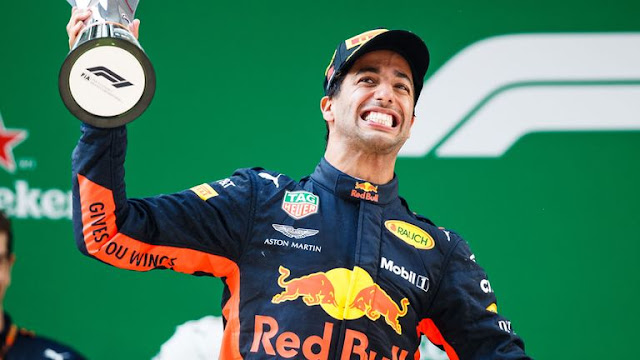 Daniel Ricciardo won the Chinese GP after shockingly overtaking, Hamilton, Vettel and Bottas to make it first to the Podium for the Red Bull team.

Ricciardo was sixth at10 laps remaining in the race but supper charged himself, into overtaking all the favourites to become champion while Sebastian Vettel who won the first two races of the season, was relegated to just eighth after a collision with Max Verstappen. The Red Bull driver was hit with a ten-second time penalty by the race stewards, promoting Lewis Hamilton to fourth and within nine points of championship leader Vettel.
Ricciardo surged from sixth to first in the space of ten laps after Red Bull opportunistically pitted for fresh tyres behind a Safety Car. before then, A race which had been slow-burning into a fascinating battle between Vettel and Bottas for victory was transformed into a barnstorming classic after a collision between the two Toro Rossos of Pierre Gasly and Brendon Hartley triggered a Safety Car.

Lewis Hamilton the 2017 champion, finished fourth, outraced by his teammate and out qualified a day before also felt bad about his performance, which after the race said he will be working towards an improvement.

“We have a tough battle ahead of us,” Hamilton admitted to Sky Sports. “We’ve been underperforming and yesterday and today have been a disaster on my side. I need to try and rectify that and get myself back into normal performance back or otherwise more valuable points will be lost.

“I’m thankful for a couple of incidents that happened ahead kept us in the battle.”