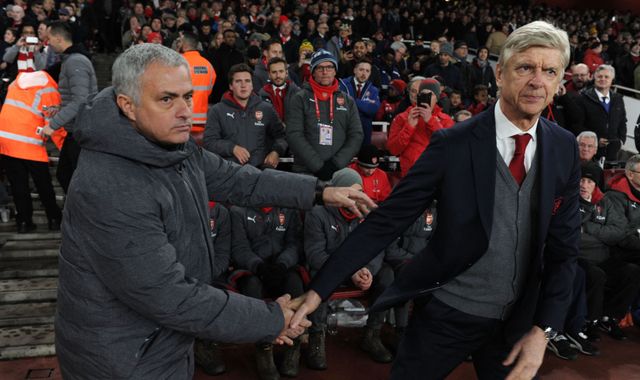 Arsenal Manager Arsene Wenger says the respect between him and the United Boss is mutual due to their Mutual Surfering, comparing the relationship with the Portuguese as that between think and Sir Alex Ferguson.

Arsene Wenger and the Portuguese have in the years have seemed great enermies both on and off the pitch but the Arsenal Boss says their relationship is more positive than perceived.

“It has been, like with Ferguson, very tense like always when you fight together,” Wenger told Soccer Saturday.

“But overall it is respectful. I must say as well it is very difficult when you play against fellow managers, they get reported things that you have not necessarily said.

“In press conferences, they say ‘Wenger said that’ even if it is taken out of context and you then get people who are upset or vice versa.

“It is very difficult to keep it calm and quiet, but over the distance the respect always takes over. Do you know why? We all suffer defeats, we all suffer disappointment and we all know that we suffer a lot.

“You always have respect for people who suffer, unless you are completely not human at all. You have to feel empathy for people who are in the same job as you.”

Arsenal shared the Premier League title with United In his early years as Arsenal Boss during Sir Alex Ferguson reign and at his brought up a tense rivalry which brought tension into the picture when both teams Clash.

“Between 1998 and 2005 it was an intense rivalry and the main rivalry was between the two clubs,” he added.

“After you had Chelsea – and Liverpool was always there – but we were the dominant teams and I just think every game had intensity, tension, rivalry and the challenges were always on the borderline.

“In the build-up to a game and after a game everything was absolutely tense. This game many times on the pitch and in the corridors was on the borderline.

“The rivalry between Alex Ferguson and myself was at a very high point and it was always very tense.”