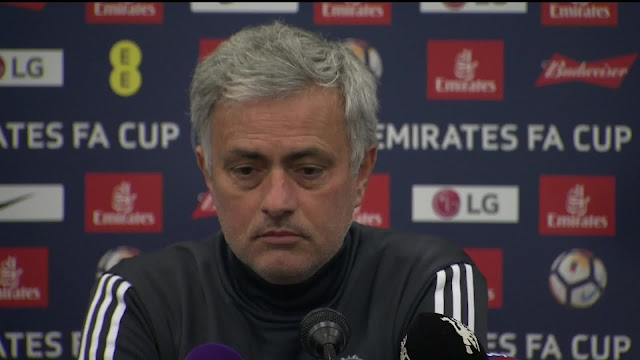 Jose Mourinho has had many clashes with the leaving Arsenal Boss Arsene Wenger and is really aware of the fact that Arsene Wenger teams have really been rivals with Manchester United teams during Sir Alex Ferguson’s reign at the club, which makes him believe that the Frenchman deserves a lot of respect from the Club.
Jose Mourinho with Arsene Wenger in the past, have had many jibes exchanges, right from the time the Portuguese first arrived in the Premier League but this according to the Portuguese doesn’t leave him with any hard feelings against the Frenchman.

“If he is happy, I am happy. If he is sad, I am sad. I always wish the best for my opponents. I always wish the best,” Mourinho said.
“For me that is the point. If he is happy with the decision he made and looks forward to the next chapter of his career and his life, I am really happy for him. If he is sad, I am sad.
“I am pretty sure that we as a club – especially because Mr Wenger and Arsenal were for many, many years the biggest rivals of the Sir Alex era – will show Mr Wenger the respect that he deserves.”

Jose Mourinho maintains, he has a lot if respect for the Arsenal Boss despite having many, witness his spats with the Frenchman and in this season has called  the Arsenal boss a “voyeur” and a “specialist in failure” in press conferences.

“It is not about regretting. Your question is a typical question from somebody who is not on this side. You are not a manager, you are not a player of course.

“You do not know the way we respect each other even when sometimes it looks like in some moments we don’t.

“Players that get red cards by aggressive actions against each other or bad words during their career and managers the same thing – in the end probably the ones that respect each other more are the ones that have the problems.

“It is power against power. It is quality against quality. It is ambition against ambition.
“But in the end it is people from the same business and people that respect each other and respect each other’s careers.

“It is not about regretting. It happened. What matters for me is the way I respect the person, the professional and the career.
“I always say for some the memory is short but especially for us the real football people – the ones inside the four lines playing and the managers – we don’t have short memories.

“I know what it means [to win] three Premier League titles, seven FA Cups and not just that. What he did in Japan and France, what he gave to Arsenal, even in a period without Premier Leagues, all the transition of the club from stadium to stadium – we know what he did.

“So again if he is happy with the decision I am really happy and I hope he does not retire from football.”