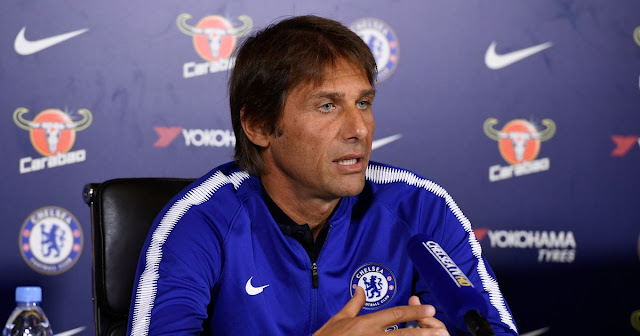 
This is an important experience for Tammy. This season it is very important for his development. He is playing, not ith regularity, but he is playing and this is right for his experience and confidence and then we will see in the future.

He is a Chelsea player and he will be an important player for the future.

Conte On Cahill’s England Call Up

I don’t know, what party?
I’m not sure. Now he is having a training session and improving a lot. He is working very hard and he is aiming to come back before the end of the season.

Conte On Putting Pressure On Spurs

Now the reality that Tottenham have a big advantage, five points more than us. The only way to put a bit of pressure on them is to get three points tomorrow. Otherwise it is difficult.

I don’t know if they are going to sell Wembley. But I think I am the Chelsea manager and I must be focused on the present and not too far in the future.

This is not so simple. I think we have to compare Salah over four or five years ago and not this Salah. He has improved a lot and developed a lot his football. The Italy experience was important for him and he is a different player to the past. It is difficult to have this comparison.

I must be honest. I am not interested in the stats. For me it was the same when I was a player. If you ask me how many appearances I had I don’t know, or goals did I score, I don’t know. For sure I think the players and I are trying to do our best. The best is to try to win every game. This season we are struggling a lot, but I am happy if I can get another win and stay behind these two managers.

They played a really good game against Burnley and showed a good link. I am very happy with Giroud against Southampton and Morata. They are two strikers in good physical condition.
It is important to score in both cases, off the bench or not. It is important to have a player in every moment to go and play and we have been struggling a lot to have a top scorer in our team.

We have to try to get three points tomorrow. It won’t be easy and we are playing against a team fighting against relegation. They are in good form and we need to try to put a bit of pressure on those ahead of us.
Realistic? It won’t be easy but we must try to get more points possible from now until the end. We have to play games very difficult but if we want to have a hope we need to get points.