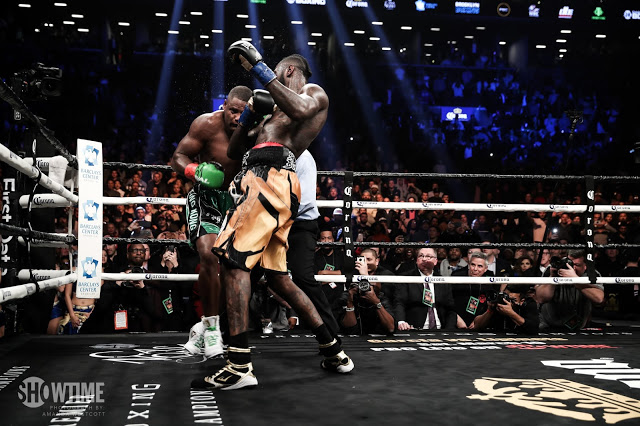 WBC Heavyweight Champion Deontay Wilder has finally reacted to allegations directed by the Ortiz team, which claims that the WBC gave him time to recover after he almost got knocked out in the seventh round.
Deontay Wilder (40-0, 39 KOs) ended up knocking out Cuban puncher Luis Ortiz (28-1, 24 KOs) in the tenth round after dropping him in the fifth and twice in the 10th but the Ortiz team didn’t like the WBC actions after the seventh, when they called for a time out period to examine the Champion.
Wilder hits back at the Cuban saying that, he too was saved by the bell in the fifth and also claims that Ortiz had dragged eight and the ninth to finish him off, if he was close to in the seventh.

“They need excuses. Every time a person lose, you notice how they need some type of excuse. We get this in every fight. What is a few seconds? If you add up all of the time [at the start of the eight], it was only five seconds at best [when they checked on me]. So what is that going to do for me to recover? That’s not going to do nothing for a person. And he had from the eight to the ninth round to do whatever has was gonna do, so that’s still more time,” Wilder Told Below The Belt Podcast.
“And people fail to realize, in the fifth round he got saved by the bell. I dropped Ortiz five times and really got counted for two of those times.”
ORTIZ STATEMENT AFTER THE FIGHT
“Look how the referee didn’t even have to look at Wilder.. he knew what he had to do. Wilder was completely stunned. We are not taking credit away from Wilder. He did what he had to do and ended the fight like a champion. But his promoters or someone with deep pockets made a sign to the referee.. it wasn’t Wilder but someone with interest in his victory,”
“I feel like we deserve a rematch and I think it should happen if Anthony Joshua doesn’t agree to fight with Wilder. We deserve a rematch after seeing this, this was a robbery and it really was an epic battle of Godzilla vs King Kong.”