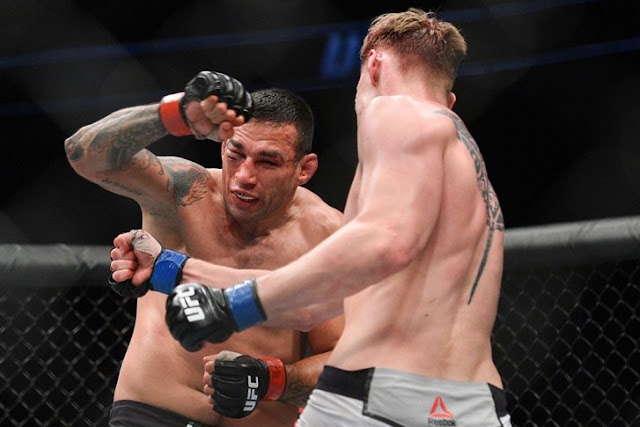 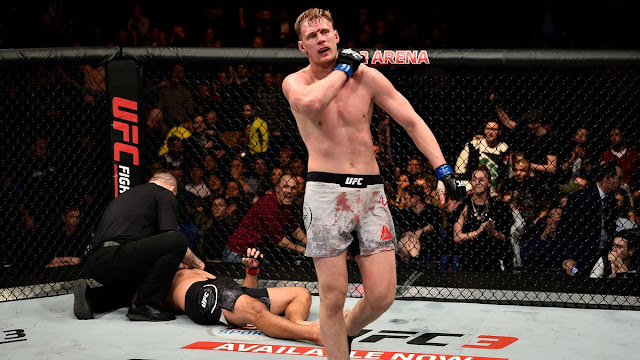 Round 1
Referee Marc Goddard on hand to oversee the main event. Werdum teases a flying kick right out of the gate, but pulls back, much to Volkov’s amusement. An early takedown attempt by Werdum is successful and he goes to work in Volkov’s guard with Volkov pinned against the fence. Werdum is able to posture up and score with ground and pound, Volkov not doing much from the bottom besides defending. Werdum landing strikes to the body. Volkov finally manages to get the fight back to the feet and he immediately ramps up the output, punching away at Werdum who simply turtles up. Werdum is tripped, but Volkov lets him back up. A flying knee by Werdum leaves him on his back again and again Volkov chooses not to engage. Single leg takedown scores for Werdum. He ends the round scoring with ground and pound from inside Volkov’s guard.
MMA Fighting scores the round 10-9, Werdum.

Round 2
Werdum opens up round two with kicks to Volkov’s body. Volkov challenging Werdum to initiate the action, then he blocks a single leg takedown. Very little output from both fighters. Volkov catches a front kick and pushes Werdum onto his back. Short left by Volkov. Single leg by Werdum and he’s back on top with half a round to work. Volkov gets out of half guard back to full, but Werdum lands punches during the transition. Volkov tries to throw hammerfists from bottom, which only gives Werdum an opening to land hammerfists of his own. Werdum postures up and then drops down, moving into half guard. He’s working for a kimura. Volkov holds on until the buzzer sounds.
MMA Fighting scores the round 10-9, Werdum. Overall 20-18, Werdum.

Round 3
Werdum again attempts an opening flying kick, easily avoided by Volkov. Volkov connects with a combination of punches that opens up cuts on Werdum’s face. The former UFC champ ties him up to slow the offense. Single leg by Werdum and Volkov scrambles out. Volkov complains about Werdum holding onto his glove, but Goddard says Werdum is holding Volkov’s wrist, so it’s legal. Werdum’s right eye is swelling up badly. Volkov stalking, but not throwing much. Werdum dives in for a takedown and makes a slick transition into back control. He looks for an armbar, but Volkov slips out and gets back to the feet. Volkov opening up some, landing straight punches as Werdum noticeably slows. Straight right by Volkov and Werdum flops to his back to try and lure Volkov in.
scores the round 10-9, Volkov. Overall 29-28, Werdum.

Round 4
The jab is working for Volkov now and Werdum’s counter punches are falling short. 1-2 combo by Volkov lands. Single leg by Werdum and he’s trying to repeat the back take from round three. Volkov working to stay heavy and he manages to spin into Werdum’s guard. Werdum controlling Volkov’s hands. Goddard calling for work. Volkov responds with big punches from inside Werdum’s guard and then he stands back up. Werdum throwing some wild punches but he’s getting the worst of it. Volkov pouring it on, right uppercut puts Werdum on his back. Volkov follows up with two huge punches that leave Werdum out cold.

Official result: Alexander Volkov def. Fabricio Werdum via KO (punches) at 1:38 of Round 4