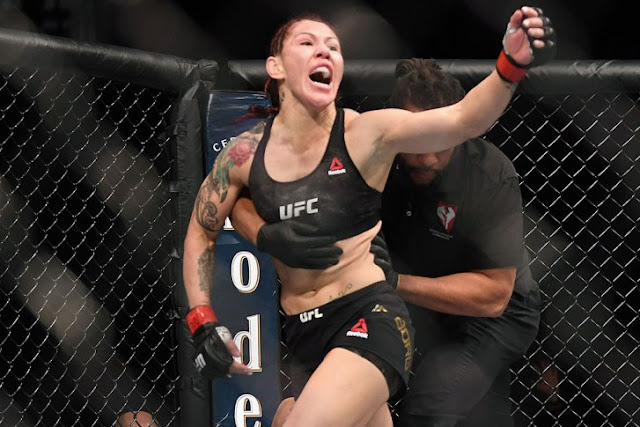 Santos lands solid and Yana grabs a takedown. Cyborg stands, but Kunitskaya works to a clinch. She gets Cyborg up against the cage and is hitting some knees. Cyborg defends the takedown attempt. Kunitskaya bails on the single leg. Cyborg breaks away and tick tocks her hard. Kunitskaya is down. She’s back up. More hits and down goes the Russian again. Big ground and pound and Yana is just covering up. Ten or more punches land and finally the ref stops it.

Frankie in black, Ortega in blue. Edgar on the immediate front foot. Combos and a pair of low kicks. Make that a third. Jab, jab, jab, right hand from the Answer and Ortega is moving backwards. Jabs from Ortega now. Overhand from Edgar. Nice left, too. Edgar with a 3-piece and lands the biscuit at the end. Ortega blocks the right. Both men moving back and forth here, throwing combos. Frankie takes a jab, but answers back with a combo. Ortega threatens a guillotine, but Edgar gets out of it. Nice elbow from Ortega wobbles Edgar. Uppercut floors Edgar! A hammerfist and Jason Herzog stops the fight! Holy KO.