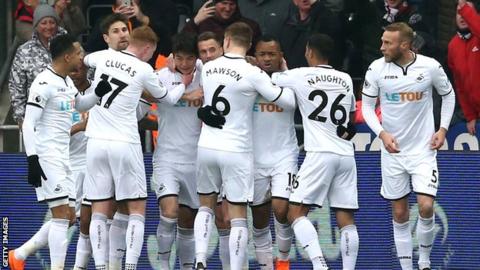 “We conceded from two corners and a penalty. We had no intensity in our play, we thought we could just stroll about.

“Winston Reid is conscious, he was knocked out, we are more worried about the injury to his knee than the knock to his head. He’s an important player for us so we hope it’s not too bad.

“We should have saved the first one, we should head the second one away and the third one is a corner and the fourth is a penalty.

“We have to be much, much better. We have the players who can do it but getting them to perform is my job.”

“I am delighted, I am proud of my players.

“There is no secret to success. It is hard work, organisation, patience, dedication and correcting mistakes. We are better and better, we are really strong at the moment.

“I put the players in the centre of everything. If you don’t have players who follow your ideas you can’t achieve anything.

“We have trained hard at corners this week, movement, and we scored twice from them. Now we must create another strategy for the next game.”

🌐 Swansea have scored 20 of their 21 Premier League penalties. Of teams to have taken at least five, that is the best success rate in the competition’s history (95%).

🌐 Ki Sung-Yeung has had a hand in three goals in his past four PL appearances for Swansea (two goals, one assist), having previously gone 14 games without registering a single goal or assist.

🌐 West Ham have conceded 37 goals away from home in the league so far this season, more than any other side in the competition.

🌐 Swansea have scored 14 goals in nine league matches under Carvalhal, having scored just 11 in their previous 20 this season before his appointment.