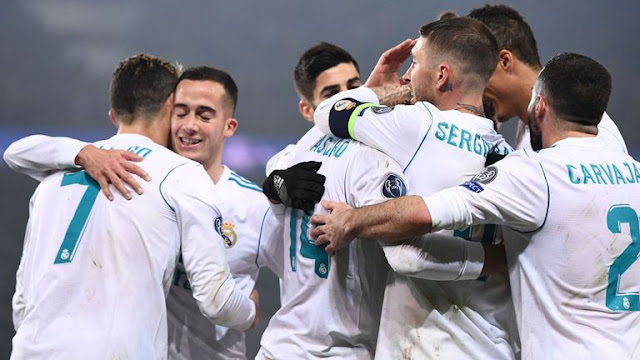 
Real Madrid boss Zinedine Zidane : “We started very well, but we deserved the win. It was a tough match, they wanted to get through but they were up against a strong team and that perhaps made the difference.
” He told BT Sport

“I must praise the players, they are the ones giving everything on the pitch. This is a tough crowd to come to, but the atmosphere is fantastic. We were focused and deserved to get through.”

PSG boss Unai Emery
“It’s true that Madrid deserved to go through and in the important moments of the game, they were better.

“They controlled 60% of the game and we didn’t do enough with the 40% we had. Losing to Real Madrid itself isn’t a disappointment, but being knocked out in the last 16 is.

“Perhaps the first half was the key. In the last 20 minutes of the first half we were better. Over there [in Spain] we had the chance, it was 50-50, but we didn’t take advantage of that.”

Statistics
🌐 Paris St-Germain lost for only the second time in 47 home games in European competition (won 30, drew 15). Their previous defeat was a 3-1 loss to Barcelona in April 2015.

🌐 Real Madrid have reached the semi-finals in each of the past seven Champions League campaigns, a record run in the history of the competition.

🌐 Top scorer in the history of the Champions League (117 goals), Cristiano Ronaldo has netted 22 goals in his last 13 games in the competition, including in every single game this season. In the first leg, he became the first player to reach the 100-goal tally for the same club.

🌐 This was Karim Benzema’s 100th game in the competition (he has scored 53 goals). He became the third French player to reach that tally after Thierry Henry (112 games) and Patrice Evra (108 games).

🌐 PSG boss Unai Emery has never gone further than the last 16 in his five previous participations as manager in the Champions League.

🌐 Real Madrid have reached the Champions League quarter-final stage for the eighth successive season – only Barcelona (10) have recorded a longer run in the competition’s history.

🌐 Real Madrid defender Sergio Ramos received his 33rd yellow card in the Champions League; more than any other player in the competition.

🌐 Marco Verratti’s sending off was Paris St-Germain’s third red card in the Champions League knockout stage since 2012-13; only Porto and Bayern Munich (four) have received more.

🌐 Cristiano Ronaldo is the second player in Champions League history to score in nine consecutive games (14 goals), after Ruud van Nistelrooy for Manchester United in 2003 (12).