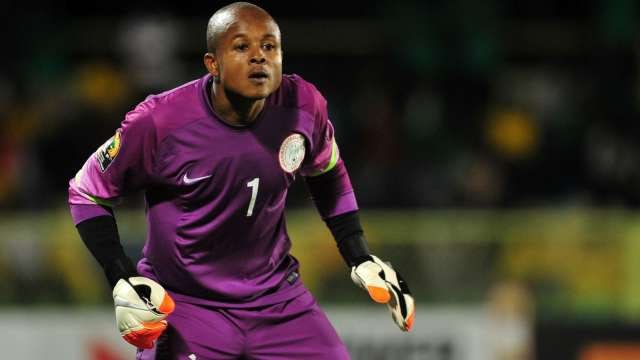 The Nigerian National Team will be heading into the 2018 world Cup with hopes of surpassing the round of 16 boundary set long ago by Legendary Nigerians in their prime years back but Goalkeeper Ikechukwu Ezenwa believes that Nigeria will not only get pass this mark but win the competition.
The home based Enyimba shot stopper sees Nigeria beating the best in the competition this time and believes the semi final or final will be their limit.
“We’re looking to go forward as far as the semi final or final,” the Enyimba man told Goal, “and I think that’s every player’s dream.
“When you go to a competition, you have the ambition want to lift the trophy, and that’s the zeal we’re going there with,” he added. “I think with God, all things are possible.”

Nigeria has made it to the World Cup six times in the past, getting to the Round of 16 three times, having endured three group stage knock outs before making their first round of 16 break out.
Ezenwa is also anticipating the clash with Argentina, which was a testing fixture and one they have faced in almost all their World Cup outings.
“I think it is a twist,” Ezenwa added. “Normally in other World Cups we play Argentina in the first games, but it’s turned around this time.
“It’s not about playing them in the last game, but winning our first and second games to qualify for the next round,” he concluded. “The most important thing still remains winning our first two games against Croatia and Iceland to qualify before playing Argentina.”