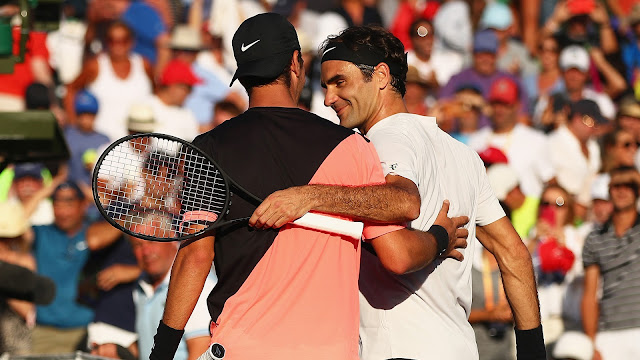 Thanasi Kokkinakis stunned the World No. 1 Roger Federer at the Miami Open, giving him his second defeat of the season, which will ended up seeing him lose his No. 1 spot to Rafael Nadal when the updated list is released.

The Australian world No 175 Thanasi Kokkinakis, came from   set down to stun the champion to winning 3-6 6-3 7-6 in Florida. The 21 year old, overcame two years of injury problems to create the landmark victory which leaves him the lowest ranked player to defeat a world champion.

“I was calmer than I thought, inside I was pretty happy, I was excited, but I kept pretty calm,” said Kokkinakis.
“When I feel like I’m playing on my terms I don’t think there aren’t too many people that can go with me. I just needed to play my game and play aggressive tennis.
“I’ve trained with him a lot of times. I took what I learned from him and sort of kind of knew how he played a little bit.”
The 20 Time Grand Slam winner gave nothing but praise for the youngster. “I’ve always liked his game.
“I’m happy for him that on the big stage he was able to show it. It’s a big result for him in his career, and I hope it’s going to launch him.”