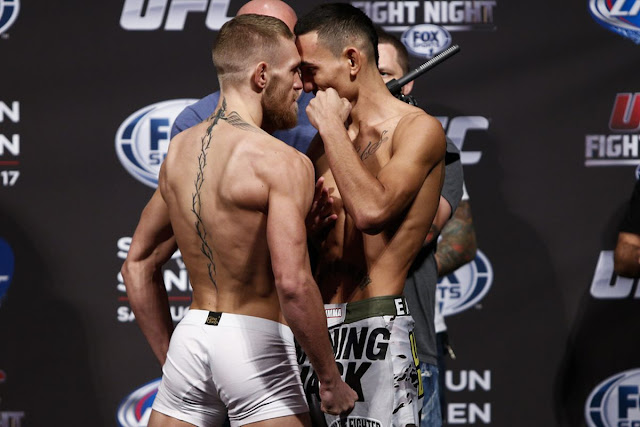 Conor McGregor has been warming up for his return to the Octagon and there had been news flying everywhere that he had summitted his name to replace Max Holloway in UFC 222 back in March 3rd, but how about a potential clash with the featherweight king..
Max Holloway lost to Conor McGregor four years ago with a  unanimous decision and since then both have gone to great heights in the sport. Max has gone on to become the undisputed champion at 145 pounds in the midst of a 12-fight win streak which dates back to his loss to Conor back in 2013 while Conor McGregor is the Lightweight champion.
For this to happen Conor McGregor will have to drop to Featherweight ones again but what exactly might be the outcome. This has prompted SUBMISSION RADIO to hook up with McGregor’s coach Owen Roddy for his take on the rematch.

“I think Conor would probably put Max away,” Roddy said. “I think Max would probably be way more confident in his ability, and if you go in there a little bit overconfident with Conor you’re gonna go to sleep. Whereas, he was a little bit more… he stood back in the first fight and obviously Conor injured himself, he couldn’t put him away but yeah, I think it would be a great fight.
“Max has done, he’s done so well since the Conor fight. He’s been on a tear, and even John Kavanagh said it back in the day, he called that Max would have been the next champion after that fight with Conor. You could see it in Max, and I think everyone sees it. He’s a great fighter, but I think Conor’s on another level compared to him as well.”
Conor McGregor’s rumored comeback to replace Max Holloway, didn’t come to fruition but his coach confirmed, he had started training for the Bout.
“I got the call off Conor almost a little under a month out, just kind of out of the blue, ‘oh yeah, look, Holloway’s out of the fight, they’re looking for a replacement to fight Frankie so I’m up for it, I’m thinking of doing it’ ‘So I was like, ‘well, alright, let’s see what the craic is,’ and we went in and he sparred,” Roddy said.
“He hadn’t sparred too hard in a while, so like went in and had a good, tough spar with one of the guys similar to Frankie’s size, similar style and stuff like that, and then looked amazing. And he’s like, ‘yeah, what do you think?’ I was like, ‘you look fresh. You know what to expect from Frankie, you’re not going to get anything like, his stand-up before in the past, you know, all his career, the kind of style of fighter he is, you know what you’re gonna get with him and you look great.’
“So yeah, he’s like, ‘look, I’m gonna reach out and see what we can do.’ He got back the next day saying that the fight’s gone, that the fight was unavailable now. So yeah. But he was up for it and he was ready to go. And you know, he was putting it in as well. Conor’s been training up here, so he’s got the bug again which is great, but unfortunately that one didn’t come to pass.”