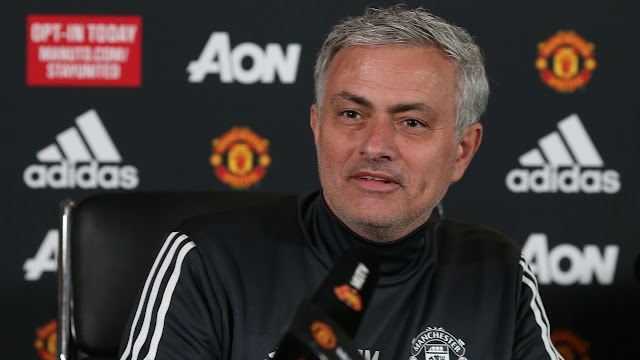 🌐 Jose Mourinho On Scott McTominay
“Of course much more important is his family to be there I was there representing Manchester United since it was his first cap and I’m really happy for the kid in such a small period of time to come from youth football to the first team to the Champions League to the big Premier League games and now his first cap at Scotland senior level is great for him”
🌐 Jose Mourinho Gives Injury Update And Players Progress
“We recovered the injured players everybody is available apart from Romero and Blind who is not yet in match condition.

We did homework and trained with the players available. We had a group of seven which was very professional with people like Phil Jones and Ander Herrera trying to recover from the injuries they had.
We have to try and be in the best possible position and that’s second”.
🌐 Jose Mourinho On Swansea And Possible Threat
“They improved a lot, we played them in the beginning but after that they have a diff period and found themselves in a diff situation but since Carlos arrived it’s obvious the team improves a lot. They got the points that many didn’t expect they could get and they are in a position not far from celebrating a fantastic achievement which is to stay in the Premier League.
We are going to face a team v well organised b the defensive point of view, they defend really well organised, with a clear idea of their defensive movement and then they are dangerous in counter attack, powerful in set pieces using the aerial ability especially of the three central defenders that are really dangerous and by the mental point of view you can feel fantastic work by Carlos, the team looks happy, confident, they get points almost everywhere, even 10 players at Huddersfield they get a point and they are doing amazingly well”.
🌐 Jose Mourinho On Carlos Carvalhal And His Nice Words
“I spoke with him last night, he told I was the kind of the coaches, not football, and he said that since my winning period with Porto and since the moment I left the country I open the door for more Portuguese coaches to leave which is something I know is true. I speak with him a couple of times every week, last night I spoke him a little and thanked him for his nice words, one things is to think another is to say”.
🌐 Jose Mourinho On Zlatan Ibrahimovic’s Move To La Galaxy
“For me it’s always sad when the big players go in the direction of the end, I remember for example Figo, last match, with me and with Inter, and I always remember as one of my saddest moments because I always feel very very sorry when the big ones finish or go to the last period of their careers.
Zlatan goodbye moment was more in that direction, he’s a huge big player that top football, European football is losing now and forever because he will not be back to this level of football but fantastic for him in this period, is a fantastic way not to go from being a player to being a former player, this period with Galaxy, these couple of years will be very good for him and American football”.
“What he can do, teach, attract, his personality, passion for football, he’s always had since his recovery was an example of what a pro should be is more the MLS and US as a football country is going to get, what more is Zlatan is going to get, will be just a way for him to enjoy the last couple of years of his football”.
🌐 Jose Mourinho Encourages Luke Shaw
“If he’s available Luke Shaw is always an option, Ashley Young was available to play against Brighton so I started with Luke Shaw, so that’s not a problem”
🌐 Jose Mourinho On Paul Pogba
“I don’t comment on my players’ performances in national teams”.
🌐 Injury Summary
“Romero is injured, and I think he will for a few weeks, I think in the end he was lucky because was a strong contusion and will take a little bit of time to recover, Ashley Young had a problem in the last part of the game against Italy but we think there is a chance for him to recover and Daley Blind come back from his treatment in Holland, start training with us in the last few days and is the only one not available, apart from Daley, after a couple of months out, we recovered all the other problems we had, including Phil Jones, Rojo played with Argentina so the picture improved a lot for us in that aspect”