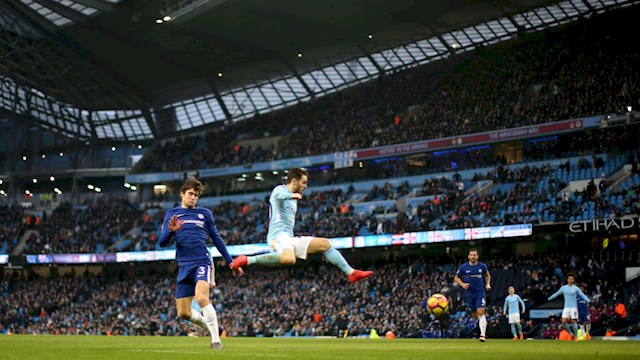 ‘We are behind the boss’ – what they said
Manchester City boss Pep Guardiola: “We are not going to play for the records. Records are always a consequence of what you have done but they are not the main thing.

“What really matters is to be champions. I never spoke with the players about the records. Next week at Stoke we are going to try and play like we play all season. After, at the end, we will see.”

🌐 Manchester City will end the day 18 points clear at the top of the Premier League, the biggest lead ahead of second place since March 2006, when Chelsea were 18 points ahead of Manchester United.

🌐 Chelsea have lost four consecutive away matches in all competitions for the first time since January 2003, when they lost to Man Utd (twice), Leeds and Arsenal.

🌐 Pep Guardiola is only the second manager to complete a league double over Antonio Conte, after Delio Rossi (for Sampdoria in 2012/13).

🌐 Only Sergio Aguero (15) has scored more goals for Manchester City in 2018 in all competitions than Bernardo Silva (5).

🌐 The Blues had just seven shots against Man City in their two Premier League meetings this season, while facing 30 themselves.

🌐 David Silva has assisted 12 goals for City in all competitions this season, his most in a campaign since 2011/12, when he assisted 19 goals.

🌐 Silva has assisted 73 Premier League goals since his debut in August 2010, 20 more than any other player in that time.