Skip to content
HomeEPL Sports NewsJOSE MOURINHO PRESS CONFERENCE : The United Boss Blast Fans For UEFA Champions League Exit Reactions
JOSE MOURINHO PRESS CONFERENCE : The United Boss Blast Fans For UEFA Champions League Exit Reactions
16/3/2018
JOSE MOURINHO HAPPY WITH PLAYERS CHAMPIONS LEAGUE EXIT
“Of course, I’m better. I’m happy with what I saw in my players after the match. I’m happy that people were sad and people were frustrated. I am happy we were exactly on the same page and I’m happy to see the boys coming back again on my page because you don’t have many days to be sad.”
WE DON’T NEED A REACTIONS TO TRAIN BETTER – JOSE MOURINHO
“We train very well, always. We train always very, very well, so we don’t need a reaction to train better than we do because the training, the professionality, the enthusiasm, the organisation, every training session with us since day one, since I arrived, the players have been absolutely brilliant.”
FOR ME, EVERY MATCH IS IMPORTANT – JOSE MOURINHO
“Every match is important. was not very objective when I said that Sevilla is more important than Liverpool. I said that possibly for some people, for some fans, the Liverpool game matters and can be more important than any other match of the season. But for me, every match is different and every match is important.”
FANS HAVE A RIGHT TO THEIR OPINIONS – JOSE
“I say to the fans that the fans are the fans and the fans have the right to have their opinions and to have their reactions. But there is something that I used to call ‘football heritage’. I try to translate from my Portuguese, which is almost perfect to my English that is far from perfect, but translation word by word is something like ‘football heritage’ and what a manager inherits is something like the last time Manchester United reached the Champions League final, which didn’t happen a lot of times, was in 2011. Since 2011, the club went out of the group stage in 2012. The group was almost the same group as we had this season – Benfica, Basel and Otelul Galati from Romania. Out in the group phase. In 2013, out at Old Trafford in the last 16 and I was on the other bench with Real Madrid. In 2014, out in the quarter-final [against Bayern Munich]. In 2015, no European football.”
“In 2016, comes back to European football, out in the group phase, goes to Europa League, and in the second knockout, out of Europa League. In 2017, play Europa League, win Europa League with me and goes back to Champions League. In 2018, win the group phase with 15 points out of a possible 18 and loses at home in the last 16.”
SOME REALITY FOR THE SUPPORTERS
“If you want to go to the Premier League, the last victory was in 2012/13 and in the four subsequent seasons United finished seventh, fourth, fifth and sixth. So, in the last four years, the best finish was fourth. This is ‘football heritage.’ It means that when you start the process you are here and you are there. It is heritage. If the fans, that I will always respect, many of them are the ones you speak with, many of them are the ones I speak with, and I am very lucky and you are very unlucky. But the ones that speak with you are very disappointed and the ones I speak with, they know what is football heritage. They know what is a process and they know when I arrived.”
JOSE MOURINHO HAS AN AMAZING JOB TO DO
“The good thing for me and the amazing feeling for me is that I am exactly on the same page as the owners, as Mr Woodward, as Mr Arnold, we are exactly on the same page. We agree in everything. We know that we have a process, we agree in the investments, we agree that we have what we have, the investments we are going to do are going to be progressively season after season, we need more than the investments, we need also, the time, but we are exactly in the same page. So, life is good. I have an amazing job to do.” 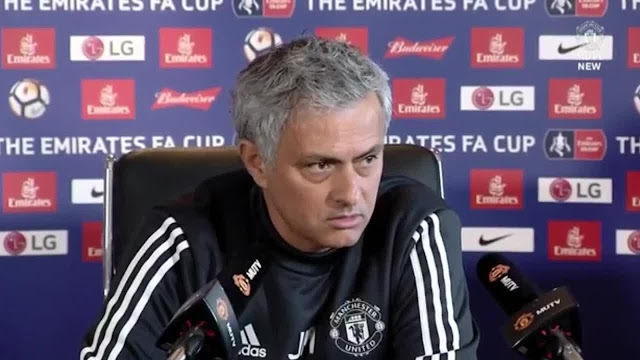 I CAME HERE FOR THE CHALLENGE – JOSE MOURINHO
“Yesterday, I met a new person that we have in the club, working in a different area, nothing to do with my job, it was a person that came from another club and I asked them: “Why did you decide to come?” And the person told me: “Because, I did a fantastic job in another club, and I know that this club, I have a big, huge job in front of me to do, so I came for the challenge.” Well done. Well done. My decision to come here was based on the same thing. I could be in another country, with a league in the pocket, the kind of league that you win even before the league starts. I could be, I’m not, I’m here.”
MOURINHO WANTS TO LEAVE A LAGACY
“One day when I leave, the next Manchester United manager will find here: [Romelu] Lukaku, [Nemanja] Matic, of course [David] De Gea from many years ago. They will find players with a different mentality, with a different quality, with a different background, with a different status, with a different knowhow. For some reason, you go to the Champions League quarter-final like today and there are four clubs that are always there. Always there. Barcelona have always been there in the past seven or eight years. Real Madrid have always been there in the past seven or eight years, Juventus is always there, Bayern Munich is always there and then of course, now and again, another club like my Inter [Milan] and some other clubs like Monaco also appear.”
I AM NOT GOING TO CHANGE OR RUN BECAUSE OF A FEW BOOs
“I’m here and I’m going to be here. No way am I going to change my mentality. For me, I don’t know if you know the expression, I don’t know if the translation to English makes you understand but there is a quote that I like, which is something like ‘every wall is a door’. I’m not going to run away, I’m not going to disappear, I’m not going to cry because I heard a few boos. I’m not going to disappear from the tunnel, running immediately. The next match, I will be the first to go out.”
JOSE MOURINHO AND THE RELIGION “HAPPY WHEN OTHERS ARE HAPPY
“I respect the fans, I’m not afraid of anything. I’m not afraid of my responsibilities. When I was 20 years old, I was nobody in football. I was somebody’s son. What I was, with a lot of pride when I was 20 years old, I was somebody’s son. You know? And now, at 55, I am what I am, I did what I did, because of work, because of my talent and because of my mentality. So, you know, they can be together, I understand that for many years I was really hard for the people that don’t like me  ‘here he is again, here he wins again, here he is again, here he wins again’. So for 10 months, I win nothing. For 10 months, I win nothing. The last title that I won was 10 months ago. I beat Liverpool, I beat Chelsea, I lose against Sevilla and now is their moment to be happy. Okay, you know, I also learnt that in my religious formation, be happy with others’ happiness, even if the others are your enemies. So, I am a very lucky guy and I’m really happy to be what I am.”