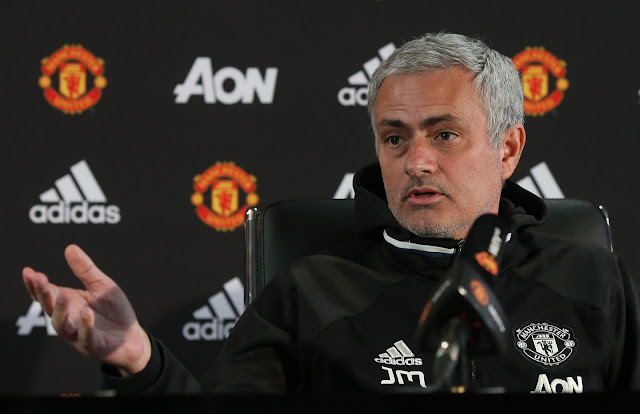 🌐 JOSE MOURINHO ON CLASH OF STYLES
“Some of the guys with an opinion couldn’t resolve their own problems when they were managers, so they are giving opinions like they have, solutions for everything but it is not like that but they are in a position where they can give opinions about everything.”
“Sometimes I read, sometimes i don’t, sometimes I listen, sometimes I don’t; this week I was more focused on enjoying Champions League and Europa League and preparing my match than to be focused on opinions.But of course everyone has opinion.”

” I had a laugh with him. That’s fine. He’s an important guy for me, one of the guys that I trust, that I love the attitude, I love the character.”

” Against Crystal Palace, there was nothing that happened after our third goal but I told him central defender, so after the third goal he was playing central defender in a back five with Smalling and Lindelof because I couldn’t make any more changes. So when I say to the striker go there and do a job for me he is a sergeant.”

🌐 MISTAKES AGAINST PALACE NOT FORGOTTEN

The negatives of the second-half because in the second-half at 2-2 they had a big chance to win it before we scored the third goal.
That ball lost and unbalanced transition, that easy cross from the right, the free header in the small box…we made mistakes in that match, we had good things but we had also mistakes.

“It helps. It helps. Crystal Palace I can imagine if we are losing 2-0 and our away fans, how many? 1,500 or something like that or 2,000? We could feel disapproval or criticism or support. It was 2-0 down and we only felt support and at 2-1 we kept feeling more belief and at 2-2 we felt they want us to go for it. They can help. Of course, Old Trafford is a huge majority of Manchester United fans, so they can help.”

The other two means we are in the Champions League quarter-final or no, means we go to a Wembley semi-final or no.
So I don’t look at it. I want to win of course, it is a big match, it’s a big opponent, is the team just behind us, is a team that is already in the Champions League last eight so of course it is a big match but I’m not very good on that rivalry. Every opponent is a rival”.