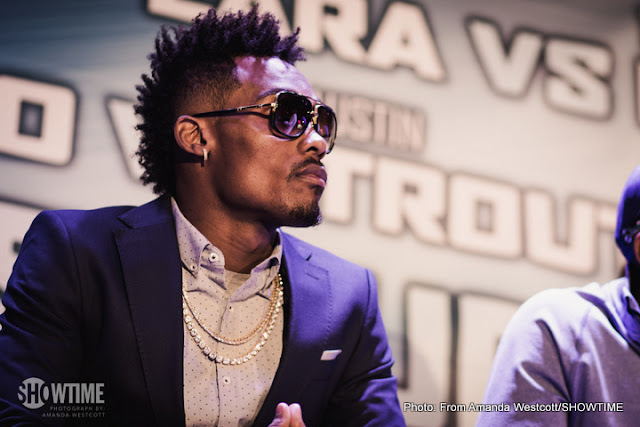 Jermell Charlo doesn’t seem to think highly of Adrien ‘The Problem’ Broner and Gervonta ‘Tank’ Davis and has shown he is displeased with fighting in there undercard with some critical criticism only your enemy will adopt for you.
Charlo started with his assessment of
Adrien ‘The Problem’ Broner and his constant result of a loss to his fighting of a nobody as a main event. Then turning to Gervonta ‘Tank’ Davis, claims he isn’t the personality he claims and that he hasn’t even fought anyone of note.
“You’re coming to see me fight next. Nobody is coming to see Adrien Broner,” Jermall Charlo said on his social media site. “I don’t want to be on that card. You think I want to be on that card? No, I’m being real. I don’t want to be on Adrien Broner’s card again. I’m a curse to Adrien Broner. Every time I’m on his card, he loses, and then it’ll be like Hispanics vs. Blacks, and I’m fighting Hispanic. I still do what I got to do, but this mother-(expletive) don’t do what he’s got to do,” Charlo said.
Speaking of the publicity and awareness, he claimed, he doesn’t see any thing attractive in the main event. As Broner, who is seen by the Boxing World as a beyond prim fighter.
”The main event looks like s—t. The card don’t get no recognition,”
”No, I don’t want to be on Adrien Broner’s card. I’m sorry, I’m just speaking facts. I don’t care,” Charlo said.
Charlo was initially supposed to defend his title on the Wilder-Ortiz card but due to Centeno Jr rip injury, the fight was shifted to April 21 in Broner’s Undercard which is not good as according to Charlo, who feels he might end up losing as a result.
”I’m still going to make my paydays anyway, but who he got? Tank? That little [expletive] aint fight nobody,” Charlo said about Gervonta ‘Tank’ Davis. ”He’s with Mayweather, and he ain’t fought nobody. If Adrien Broner don’t win this fight, we’ll have a great career. He’s deleted. This little fat Tank mother-expletive think he got it.
“He thinks he’s Mayweather. I read the comments that he’s mad because they moved me to his card, and him and Adrien Broner’s supposed to take over. I’m sorry; my opponent got a broken rib. I got to fight him on your card, and that means your TV time will be cut short. You better knock your boy out, because I’m going for Centeno, whatever his name is. Every time I see you in public, you ain’t really about that s—t. You stuttering, slow, dumb-talking mother-f—-r,” Charlo said.