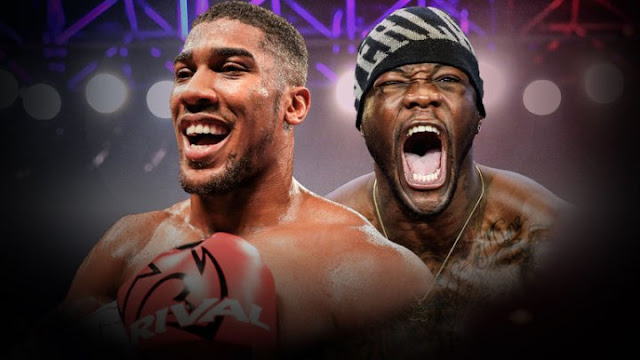 WBC Heavyweight Champion Deontay Wilder has constantly been out to get a fight with the IBF, IBO, WBA Heavyweight champion Anthony Joshua and after eliminating his biggest treat  Luis Ortiz, he promises to take Anthony Joshua out too by KO.
The Unbeaten Heavyweight king Joshua (20-0, 20 KOs) still has a unification fight with WBO Heavyweight Champion Joseph Parker (24-0, 18 KOs) on the 31st before a Wilder fight can be arranged but the “Bronze Bomber” says he is coming for the biggest in the weight class and he is not only going to defeat him, he will “Knock Him Out”.
“I’m going to take the baddest man in the division! It’s just like going to prison when you want to find the toughest man in there to show to get him to go at you. You got to let him know in the prison – I come in peace,” Wilder told Talk Sport.
“But, if you break this peace, I will show you when I come in the division and get the toughest man in the division. And not only do I win, but I knock him out. This is the fight, the biggest fight of our lives, the biggest fight of this history! It’s going to happen, all they got to do is make the fight.”
Deontay Wilder (40-0, 39 KOs) has cleared his part of opposition and expects Joshua to do the same against Parker but also believes that Parker could still upset Joshua but anyways, it will open up ways for a major unification in the fall.
“It’s short and simple. Good luck on March 31, hope you prevail. Let’s give the world what they have been waiting for. Let’s give the world an epic fight, one that’s going to be in the history books for years and years to come. One that the next generation, and the next generation will be talking about because it was just that great.” he added