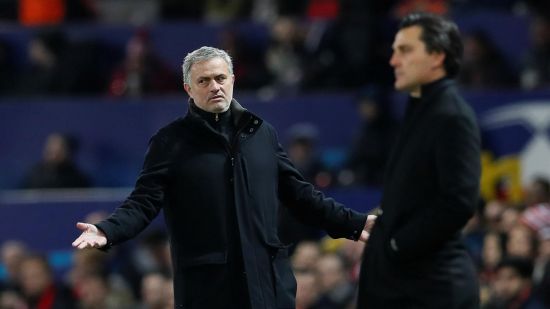 Manchester United Boss Jose Mourinho has made clear to the United fans, that this isn’t the first time they are getting knocked out with a loss at Old Trafford.
Manchester United got knocked out by Spanish side Sevilla, with a 2-1 win at Old Trafford, in their UEFA Champions League second leg round of sixteen tie.
Wissam Ben Yedder scored twice to ensure the Spanish side moved on to the quarter finals of the competition and Mourinho unfazed by the anger witnessed among the fans, reminded them it wasn’t the first time they have been in such a situation.
“I’ve sat in this chair twice before, with Porto – Manchester United out; with Real Madrid – Manchester United out, so this is nothing new for this football club,” said the United boss in his post-match press conference.

“The first goal was important and we tried to be aggressive and intense; there were similarities with Liverpool game,” Mourinho told Des Kelly.
“However, we did not score and Sevilla progressed, and kept the ball well but we contained them in the first half.
“In the second half we had chances but then they scored one and from there the game became more emotional. The second goal made it almost impossible.
“We had good periods and good situations and while we did not have great control of the game, I cannot say that my players were wrong in terms of their attitude.”
“A fantastic team like Tottenham are in the same situation as us. They have the FA Cup and to fight for top four.”
“That is football, we lost. Tomorrow is another day.”
Manchester United will turn their faces to the FA Cup tie with Brighton before the short international break