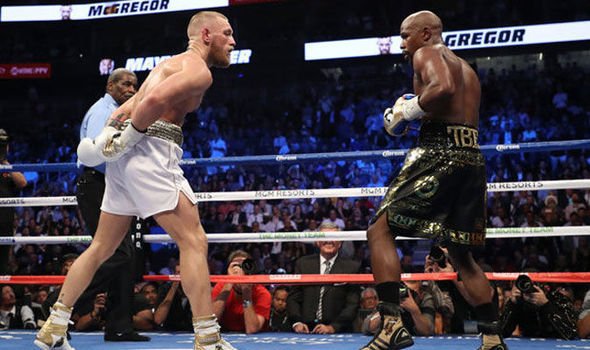 MAYWEATHER ON TRAINING WITH UFC  CHAMP WOODLEY:
“I’ma start soon. We been texting back and forth, we talked a couple times. So we gonna start working out real, real soon.”
ON DEALING DEAL WITH KICKS:
“With any and everything you have to make adjustments. So it’s probably gonna be a lil’ difficult but it is what it is.”
Watch Full Interview
CONCERNING MAKING FULL TRANSITION WITH THREE MONTHS OF MMA TRAINING :
“[I’ll] probably need a little bit longer, a little bit longer. Even if it takes 6-8 months, whatever it takes. We wanna make sure everything is done correctly and everything is done the right way.”
ON HIS WRESTLING AND HOW HE’D DEAL WITH WRESTLING TACTICS:
“I mean it doesn’t matter. You know, I can wrestle. You know, my wrestling game is not that bad. On a scale from 1 to 10 I’ll say it’s probably a 7, and I think we can take it up to like a 9 if possible. Of course my hand game on a scale from 1 to 10 is 100. And the kicking game, on a scale from 1 to 10 is probably a 4.
“So we have to tweak a few things then, take things to that next level. You know I can’t overlook or knock any MMA guy. Tyron is unbelievable. Unbelievable fighter, tough competitor. Conor McGregor, he’s a tough competitor, helluva fighter. There’s a lot of tough, rugged guys out there in MMA and I can’t overlook or disrespect those guys.”
WILL CONOR BE HIS FIRST MMA OPPONENT:
“I was thinking…I mean, me, myself, I really don’t know. We can’t say. That’s why I pause because I can’t really say, you know. I have to talk with my team, speak with my father, and then see how it’s gonna play out.”
ON WHICH ENTICING AMOUNT WILL HE HIT THE OCTAGON:
“Well, you know, it’s all about presenting the right numbers. And, of course, they gonna present the right numbers [smiles]. And we gonna make it happen.”