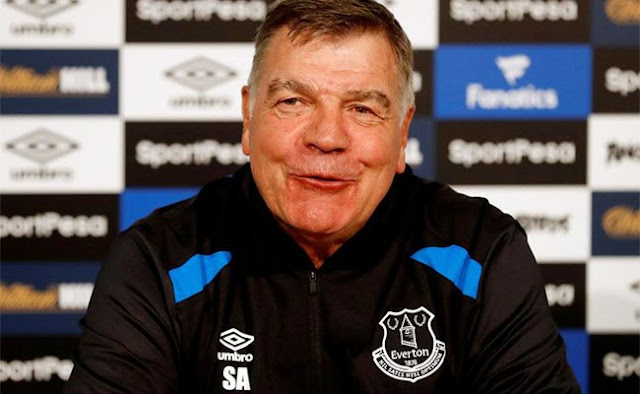 🌐 Big Sam On Manchester City Vulnerabilities
I was very impressed with Dominic against Manchester City that day [in the 1-1 draw at the beginning of the season.] Then you look at the Bristol City game where they got a result on their own patch and you have to look at where their vulnerabilities are if we’re to get something from this game tomorrow
🌐 Reasons Why Manchester City Are Good
£350m had a bit to do with it! Money has been well spent. It’s a lot of money on quality players. Those players have brought so much more to the team overall. The average age has been reduced, the confidence has grown and they believe every game they walk out on they’re not going to get beat. We can’t be intimidated by that. We’ve got to master our gameplan tomorrow throughout the 90 minutes. It’s a big challenge and one we should really look forward to on the basis we’ve got back-to-back wins and a good home record.

🌐 Big Sam On Pep Guardiola
Guardiola can go to any country he wants and deliver. It’s like Jose Mourinho. Pep’s ability to find quality players and the way he fits them into his system….his first season was finding his way and he’s done that and identified what was wrong and put it right. He’s beaten all the biggest clubs in Germany and Spain and now he’s making City one of the biggest clubs in the Premier League.
🌐 Big Sam On Hosting Manchester City At Goodison Park
“You have to be in a positive frame of mind,” he said.
“We have to say we can challenge them and play against them. You can get a result but we’ll have to play our best.”
🌐 Michael Keane World Cup Dream Depends On His Performance In The League – Big Sam
“A World Cup place depends how he plays as a team,” Allardyce said.
“If he continues to grow, as he has done recently, there’s a chance. He has to be at his best for Everton to attract the attention of Gareth.
“He’s been helped by the return of Jagielka, Coleman and Baines. When you get your best players back you’re going to improve. As much as Jonjoe and Cuco did a fantastic job, the balance of Seamus and Leighton, their passing ratio, their qualities, they have better experience.
“We’re bound to improve when they play.”
🌐 Big Sam Speaks On Jordan Pickford And His International Break Performance With Holland
“He’s given Gareth a lot to think about with his performance the other night,” Allardyce said.
“I know people have gone on about him conceding goals for Everton this season but you look at the sort of saves he makes.
“He’s been extremely busy – far too busy on some occasions – and we’ve managed to quell that lately. We’ve reduced our goals conceded since I’ve been here and that helps the goalkeeper.
“He’s always there when needed.”