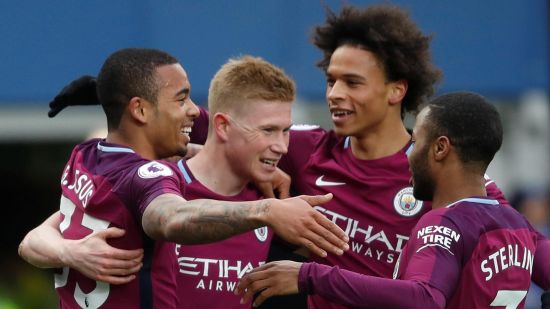 🌐Indeed, his City side are the 10th team to have beaten every other top flight club within the same season, and the first since Manchester United in 2010-11.

🌐 Guardiola has now beaten 21 of the 22 Premier League teams he has faced as a manager in the division, only failing to beat Middlesbrough in two attempts (D2).

🌐 Manchester City’s final possession figure of 82.13% is the highest by an away side in a single Premier League game since we have this data available (2003-04).

🌐 This was the first time that Everton conceded 3+ goals in the first half of a Premier League game at Goodison Park since August 2009 against Arsenal.

🌐 David Silva has provided six Premier League assists against Everton, more than he has against any other side.

🌐 Since the start of the 2015-16 campaign, Kevin De Bruyne has provided 42 assists in the Premier League, more than any other player in the Top 5 European leagues.

🌐 Raheem Sterling has scored 21 goals in all competitions this season; only one Englishman in the Premier League has more – Harry Kane (35).

🌐 No Everton player has been directly involved in more goals in all competitions this season than Dominic Calvert-Lewin (eight goals, six assists), level with Wayne Rooney.