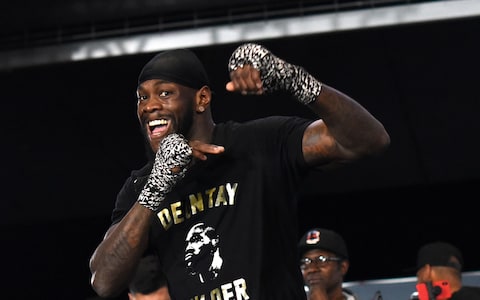 Anthony Joshua’s Promoter Eddie Hearn has been all over media trying to get Wilder, who is advocating for a fight against Anthony Joshua, Fight Dillian Whyte after his impressive Showdown with Lucas Browne last weekend but this seems hard leaving the promoter with some fairytale ideas.
The WBC Champion Deontay Wilder was planning a face to face hype, with Joshua after his fight with Parker but the idea of bringing Whyte along made him change his plans, as it wasn’t heading towards unification.
The two Heavyweights are wanted by fight fans and this will no doubt bring some ones in a life time purses for the fighters, but the Essex based promoter has his doubts, as He brings Whyte in the picture and believes signing the Alabama fighter will help him get a Whyte Showdown which will eventually serve as hype to a potential 100 million cash fight with Anthony Joshua.

“I think that’s a real possibility. If I was Deontay Wilder, how could I not think that signing with us was a good idea?
“I could pay him probably double his highest ever purse to face Whyte and then I could set up the Joshua fight very easily. Why wouldn’t you do that?”
Meanwhile, the American sees the promoter and his team to be scared of him, due to his ability to end dreams and plans.
“Eddie Hearn is scared. I see it in his mannerisms whenever I’m bought up. I’ve been calling him out for years, they don’t want it.
“I love proving people wrong and I’ll do it time and time again. Us Americans chose our own path, I do what I want to do.
“I’m too athletic, I’m too hostile, I punch too hard. No other Heavyweight has the agility I have. I move like a middleweight.
“I’m very confident in what I do in the ring. There’s no man that I have stood in front of that I haven’t knocked out.
“I am the one that ends all of their plans. I’m too dangerous for them. He needs to step up and make this fight happen.”