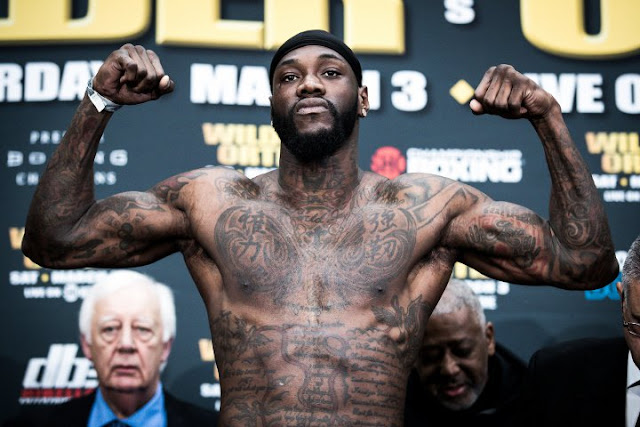 WBC Champion Deontay Wilder has been struggling to land a unification fight with Anthony Joshua and while struggling had actually eliminated all the fighters in his way after the Ortiz fight and before the Whyte-Browne fight.
The 32 year old KO master from Alabama now sees his efforts disappear into thin air as Anthony Joshua’s Promoter Eddie Hearn brings WBC #1 contender Dillian Whyte into the picture, as a fight to determine the Joshua fight.
“I expected Eddie to do that because he needs something to fool the people,” Wilder told BoxingScene on Wednesday. “He needs something to tell them. He’ll tell them anything but the truth.

“Everybody knows I’m not scared. Everybody in America and half of the people over there in England know Deontay Wilder ain’t scared of no man. I just beat the most craftiest, skillful guy in boxing [Luis Ortiz]. We know who’s scared here. We know who’s been trying to get this fight done.
“Joshua ain’t even mention my name, but I’ve mentioned his name. They don’t want this fight, and so they needed something to fuel their fans up with the excuses, to continue to keep this going. But a lot of the UK fans are waking up, seeing the type of person he really is. They ain’t feeding into the bullsh*t that he’s selling.”
The WBC Champion also called off his appointment at the Joshua-Parker fight because his intentions of using the fight to hype his potential fight with Joshua to introduce Dillian Whyte into the picture.
“My whole decision of not going to the fight was definitely a team decision, my decision at the end of the day,” Wilder said. “But it was a turnoff when Joshua and his people said that I wouldn’t be allowed in the ring, that he would have extra security and a restraining order and all that stuff. He’s on record saying that. It’s a turnoff to me. The point is why be there if you can’t hype up the biggest heavyweight fight in a long time? They say they want me to hype the fight up, they want me to raise the profile of the fight. What better way than free advertising? That was free advertising. Nobody had to pay for that.
“But they don’t want this fight. They don’t wanna fight me, and that proved it. For that reason, we felt like we didn’t need to go. Because [Hearn’s] whole focus, his whole, main concern, is about another fighter [Dillian Whyte]. It ain’t got nothing to do with me and Joshua. That’s his whole high right now. He’s not trying to make the Joshua fight. He’s trying to make another fight that we don’t want.”