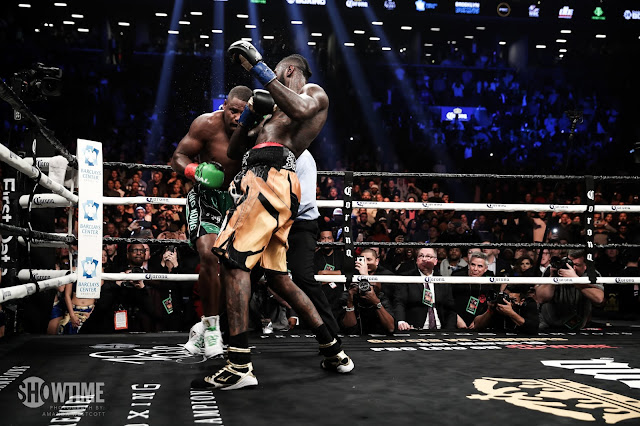 🌐 Wilder landed 55.8% of his power punches in the last two rounds after landing just 32% in the previous eight rounds

🌐 Ortiz landed 43.4% of his power punches in the fight, the highest pct. by a Wilder opponent in 20 of his fights tracked by CompuBox 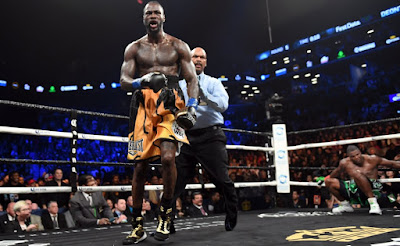 Wilder needs all three rounds on my card – or a KO of course, and he might fancy one late if Ortiz begins to feel weary. Ortiz is down but it’s a slip, but he was caught in the earlier exchange. Wilder senses blood and chops away – Ortiz is down! This time he could be out – no he makes it back to his feet! Another right! AND IT’S OVER!!! 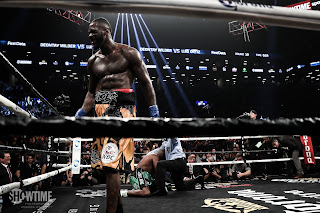 Into the last third of the fight, and Ortiz wasn’t as quick off his stool at the start of this round. Wilder lands with a right early on and he looks to have recovered his senses. But it’s the Cuban who lands the eye-catching shots as he lets his left hand go and this hasn’t been the round Wilder would have wanted if his challenger is indeed tiring. But Wilder lands a right in the final 10 seconds! And they land simultaneously on the bell! : 10-10 (84-87)

Can Wilder recover from that or will Ortiz be too tired after that effort? The Cuban is back on the front foot as he launches another attack. Wilder attempts to respond but he’s soon on the back foot. Ortiz takes the fight to the champ’s body and he shows no sign of slowing. There is certainly nothing coming back from Wilder and he looks happy to survive. He takes another left hand and to be fair, Wilder has shown he has a decent chin. : 9-10 (74-77)

A quieter start to the round after that thrilling end to the previous session. Ortiz is the one forcing the pace but neither man is landing – but Ortiz does now! And Wilder is hurt! He’s against the ropes and he looks to be going.. seconds left…. Wilder clings on… and the bell saves him surely! : 9-10 (65-67)

Well that could be a game-changer and just what Wilder desperately needed. Ortiz comes out for round six looking to land but surely Wilder’s confidence has skyrocketed. The pair trade blows in the centre of the ring and this time Ortiz stays upright. Much better from Wilder.  10-9 (56-57)

Ortiz looks mightily confident in there, dancing on his feet as Wilder continues to struggle. The crowd are still restless but this is almost a punch-perfect performance so far from the Cuban, and he must be wondering if a response is coming anytime soon. Wilder attempts a right uppercut but is short of the target. He hasn’t been able to solve the Ortiz puzzle yet. He does manage to land a right and late in the round – and another puts him down! Ortiz survives the count. : 10-8 (46-48)

Wilder finally startd to let his hands go and connects with jabs to the head and body. But Ortiz is landing the bigger shots and a left forced the champion back. Another left connects and another, this one to the body. Wilder is back in his shell and looks reluctant to return fire. Wilder is warned for pushing as the Cuban looked to pin him in the corner. : 9-10 (36-40) 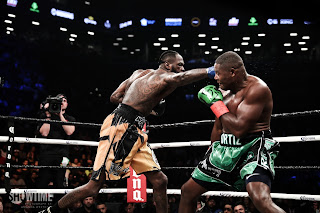 Wilder growing in confidence as he looks to land that right hand but the only shot he has committed too was wild. The crowd begins to boo as neither man shows any intent in the ring. Ortiz still the one looking to make inroads. : 9-10 (27-30)

Wilder content to box on the back foot and he manages to land a jab at last. Ortiz over-reaches and slips, no knockdown called. Wilder then tries to take advantage by opening up but Ortiz survives. The Cuban then begins to re-assert himself, forcing Wilder into his own corner where he stumbles. : 9-10 (18-20)

Ortiz looks the livelier in the opening stages a Wilder tries to figure out the Cuban southpaw. Ortiz catches the champion twice with his left hand and gives the American something to think about. Wilder slings his hands low and tries to land a right but takes a left for his troubles. Opening round to the challenger.(Wilder first): 9-10