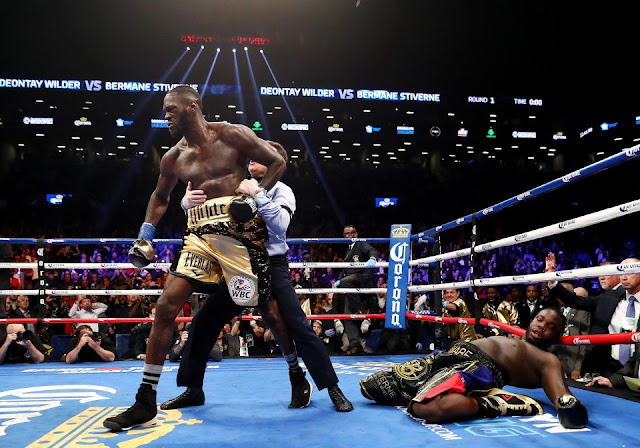 No doubt WBC Champion Deontay Wilder will be facing, one regarded as the biggest opponent in his career, in the person of the Cuban undefeated Ortiz (28-0, 24 KOs, 2 NC) but according to the champion, he is doing his usual duty of taking out “The Trash” in the Heavyweight division.
Despite the speculation of Ortiz being a treat to his dream of unifying titles in the Heavyweight division, the 32 year old, believes, he is going into ring just like every other fight and has no issues preparing foo Ortiz.
“With Ortiz being a fighter, and my attitude toward respecting all fighters, I get up just the same as if Ortiz was just a prospect just coming up, just now coming on the scene,” Wilder said.
“So, you know, I must respect all fighters that step in the ring because we risk our lives in that ring and I know Ortiz is gonna bring the best of him, just like any other one. So, you know, I get up just fine for Ortiz.
“I actually can’t wait to get in the ring with this guy because Ortiz has been one of these fighters, with that Cuban background, and his schooling, 300 amateur fights, and a lot of guys have avoided him. Even champions have avoided him. So I’m doing the champions a favor right now by taking out the trash.”
Ortiz has had a huge experience in the ring both as amateur and professional, which leaves Champions scared and Wilder believes, taking him out will grant him his deserved respect in the division.
“Ortiz has been avoided for a long time in his career,” Wilder said. “Like I said before, even champions have avoided him. And I took this opportunity to say, ‘You know what? I wanna pull this card. I wanna fight him. If people have said that he was the best, then I wanna fight him.’ Because I always say I’m the best. I always say I’m the most dangerous fighter. I always say I’m the king of the heavyweight division, and thus far I haven’t gotten my credit.
“So if this is the step I must take, if Ortiz is the man I must defeat and knock out to get my due respect and credit to the world, then I want him. I don’t care what he’s done in the past. I don’t care what he’s doing now. When we get up in that ring March the 3rd, it’s going down.”