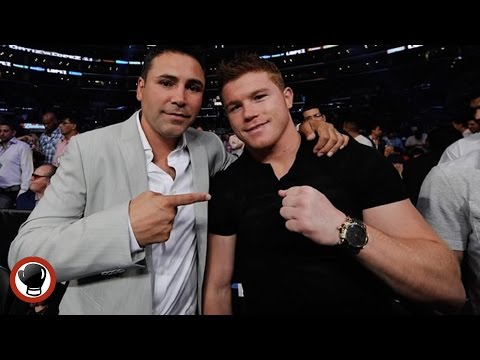 IBF, IBO, WBA, WBC middleweight champion Gennady Golovkin (37-0-1, 33 KOs) exploded on ESPN concerning Canelo Alvarez (49-1-2, 34 KOs) failed drug test, taking things very personal and pointing fingers at Golden Boy Promotions CEO Oscar De La Hoya.
Their first encounter ended with a controversial split draw and with that both fighters had promised to make sure their rematch doesn’t come to the judges but this intended rematch landed on shaky grounds when Canelo failed a drug test back in February and GGG is very displeased about it.

“Again with Mexican meat? Come on,”
Golovkin said via ESPN. “I told you, it’s not Mexican meat. This is Canelo. This is his team. This is his promotion. Canelo is cheating. They’re using these drugs, and everybody is just trying to pretend it’s not happening.”
“It was pretty obvious when (Canelo’s) muscles were all (enlarged) … and with the traces of injections, which were visible,” Golovkin said. “I can talk about Oscar De La Hoya, too. He is also not clean. He’s dirty.
“You should take a look at the photos and ask a doctor. Ask any doctor. Let him explain what those (muscles) are. It’s better even to use the lie detector. Then there wouldn’t be any silly questions about meat or fruits or chocolate.”
Gennady (GGG) Golovkin is still expected to face Canelo Alvarez on the May 5th at the T-Mobile Arena in Las Vegas, despite Canelo’s failed drug test and Nevada State Athletic Commission is still expected to make a ruling on further drug tests.